Super Bass, known as Super Forte (スーパーフォルテ, Super Forte) in Japan, is the combined form from Bass and Treble in the original Mega Man series.

Dr. Wily made Bass pretend to be an ally of Mega Man to enter Dr. Light's Laboratory and steal the plans from an upgrade for Mega Man and Rush that Dr. Light designed, using them to create his own version of Super Mega Man for Bass and Treble. After Bass is defeated in Wily Stage 1, he combines with Treble in Wily Stage 2, becoming Super Bass. Like Super Mega Man, Super Bass can fly and has a rocket punch, but is also able to fire charge shots. 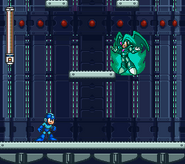 Bass transforming into his Super Form 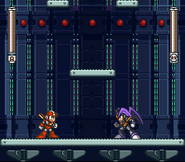 Mega Man and Bass fighting in their Super Forms

Bass combines with Treble in Wily Stage 3 and is powered up by Evil Energy. He can fly as long as he wants, fire two consecutive charge shots before having to charge again, and shield himself with a large, sphere-shaped, purple aura. He can also fire giant, comet like blasts that can break apart and fall down as multiple smaller blasts, as well as being able to fire powerful laser beams.

Super Bass shielding himself with a Dark aura

Bass can purchase the item Treble Boost in Auto's shop for 200 screws, which allows him to turn into Super Bass for a limited time, gaining flight and firing shots that travel in three directions at the same time.

InRockman & Forte: Mirai Kara no Chōsensha, Super Forte can fire in 1 of 7 directions, but can only be used once, requiring to be bought again in the shop after use.

Bass starts with Treble Boost, which acts like its Mega Man & Bass appearance. Also, if Bass falls on a pit and has Treble Rescue, Treble will appear to rescue Bass, turning him into Super Bass for a brief time to escape.

Super Bass is a S rank Hunter Program exclusive to the DiVE Festival.

In Warrior's Day Off, Bass changed into Super Bass after being damaged in his battle in the amusement park to retreat.

In Power Battle, Bass changed into Super Bass to fly towards a neaby city and destory it inorder to force Mega Man to fight him at full power.

In The Greatest Enemy in History, Bass arrived at Copy Mega Man's location as Super Bass.

In To a Shining Morrow, Bass went to space as Super Bass to fight against the Stardroids, defeating Saturn.

Super Forte fights against Super Rockman inside the Wily Castle.

Super Forte appears during the battle between Rockman and Tengu Man to fight against the latter. Super Forte lures Tengu Man to the atmosphere of Earth, making Tengu Man unable to use his wind attacks and beating him back to the aerial platform he was facing Rockman. Despite having advantage, Gospel forces Super Forte to retreat as it appears he used most of his energy, with Rockman and the injured Tengu Man resuming their battle.

Super Forte appears in the first panel from the manga searching for Rockman and Blues to finally defeat them. 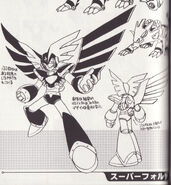 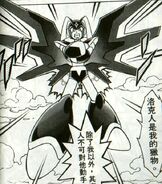 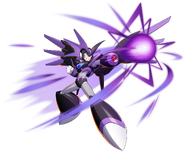