View source
watch 02:05
Wiki Targeted (Games)
Do you like this video?
Play Sound

Super Cutter (スーパーカッター, Sūpā Kattā) is an enemy from the Mega Man series that is similar to Cut Man's Rolling Cutter and is even made out of the same material. Super Cutters appear in Cut Man's Stage in Mega Man and Mega Man: Dr. Wily's Revenge.

Super Cutters are thrown from a gray machine in large quantity when Mega Man passes near it. It is better to avoid them, but if one wants to destroy a Super Cutter, Super Arm and Hyper Bomb can do it with one hit. Due to their speed, they can only be destroyed by other weapons if Mega Man first stops them with Ice Slasher. Super Cutters are invincible to all Special Weapons (including the Mega Buster) in Mega Man: The Wily Wars.

In the first game's remake, Super Arm is the only weapon that works against Super Cutters. Other weapons will reflect or be cut in half by them. In the normal and hard difficulties from New Style mode, they bounce on the floor 3 times before burying themselves into the ground.

Super Cutters are invincible and just appear in the air. When Mega Man approaches a Super Cutter, it will start doing a circular motion in hopes of cutting him. They can still be frozen by the Ice Slasher, however.

Amount of shots/hits from Special Weapons it takes to destroy a Super Cutter.

Made out of fundamentally the same material as Cut Man's cutters. It's quite hard stuff, so it's best not to engage.

Although the Super Cutter had not appeared in other media, it is listed as one of the robots under Cut Man's control in Mega Man Megamix. Also, Cut Man's Rolling Cutter was misnamed Super Cutter in one chapter from Rock'n Game Boy. 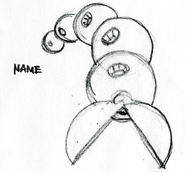 An early Super Cutter
Community content is available under CC-BY-SA unless otherwise noted.