After the battle between Gregar and Falzar in episode 24 of Rockman.EXE Beast, the Dr. Wily of Beyondard uses Trill to combine Falzar with Gregar, creating the Super Cybeast and using it as his vessel. With his new body, Wily attacks both worlds. The Super Cybeast and Wily were seemingly deleted by MegaMan in episode 25, and the Fossa Ambience is closed.

In Rockman.EXE Beast+, the Professor tries to revive the Super Cybeast in episode 5 and gives it a name, Grezar, but he is unable to control it and Grezar goes out of control, escaping to NetCity in episode 6. Grezar rampages in the area, causing severe damage to the city. As the revival was incomplete, Grezar's lower half is deformed, having the appearance of several cables, its left wing had a metallic appearance, and its programming was slowly deteriotating. Using Beast Out, MegaMan finally manages to delete Grezar by attacking the core of its programming, located inside its head; thus the Cybeast was finally defeated.

When Gregar and Falzar awakened in the MegaMan NT Warrior manga, they joined forces and combined into one Cybeast when they confront each other. With its new powers, the creature is able to appear in the real world and begins to absorb the Earth, growing to insane sizes. MegaMan and Bass fight against it to save the world. 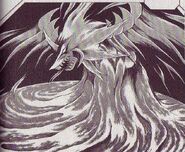