The Support Car was given to MegaMan Volnutt by the couple in the Junk Shop of Apple Market as thanks for helping them. The car was used by the couple when they were young, the Spotter husband giving support to the Digger wife. While it is no longer able to run, they give the car so MegaMan can use it to exchange Buster Parts and other equipments. The old car is located broken near the entrance of Apple Market, but once received, Roll Caskett fixes it after the first attack from the Bonne family. The Support Car can be used to transport MegaMan around the island, develop new items, change Special Weapons, recover energy, and save the game with Data.

The locations the Support Car can go are: Cardon Forest (near the Flutter), Downtown (near the Library), City Hall (in front of the City Hall building), Uptown (near Wily's boat shop), Cardon Ruins (entrance), Old City (near the abandoned factory), and Main Gate (entrance).

On the way to the Cardon Ruins, Roll uses the Support Car to follow MegaMan to the entrance as he clears the way from the Servbots so it can pass safely. If needed, MegaMan can enter the car to escape the area and try again. Near the Sub Gate, Roll destroys the fence blocking the entrance by ramming the Support Car into it. If the player stays on the way of the car, Roll will accidentally hit MegaMan as she isn't used to driving, causing some damage to him. The Support Car was apparently left behind on Kattelox Island after the Caskett family leaves the island with the Flutter.

The Support Car appears in the Rockman DASH manhua, where Roll ends up hitting some police officers due to her poor driving skills. It also appeared in the Tron ni Kobun commercial, where it is destroyed by the Gustaff. 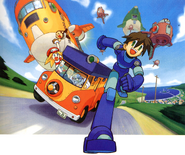 The Support Car before being repaired by Roll

Inside the Support Car 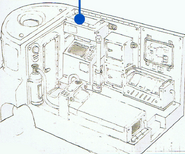 Rockman 20th anniversary illustration
Add a photo to this gallery

Retrieved from "https://megaman.fandom.com/wiki/Support_Car?oldid=339613"
Community content is available under CC-BY-SA unless otherwise noted.