Tadashi was an elderly man who was truly kind and a brilliant scientist.  Although he sadly never got to live long enough to see the birth of his grandsons, he would have been very proud of them. Lan still loves his grandfather and wished that he would have just lived a bit little longer to be with him.

Tadashi first appears after Alpha is defeated. There is a strange door left over which MegaMan and Lan go into. Inside is the saved memories and persona of Tadashi. He talks to Lan about Alpha's origins and also about personal things such as the family. Lan wants him to escape with them, but he can't because he only exists in Alpha. The hologram disappears eventually because Alpha was destroyed. He gives Lan GramNote as a parting gift and the last legacy before Alpha start falling apart and eventually his son manage to decipher the code and use it to resurrect MegaMan.EXE.

He appears in flashbacks which show him working with Wily on SoulNet with the intention of bringing peace to the world. It is shown that while they did extensive research, they decided to leave it up to their descendants to finish. During the final battle with Nebula Grey, Tadashi's voice seems to reach Lan through SoulNet and encourages him to win. This gives Lan the strength to fight SoulNet and Nebula Grey.

Main articles: Bit parts in the MegaMan NT Warrior anime#Tadashi Hikari and Tadashi Hikari (Beyondard)
Tadashi only has a bit role within the anime, appearing in flashbacks throughout. Like in the video games, he is responsible for many great creations, such as PharaohMan, Spectrum and the Net Wrecker. 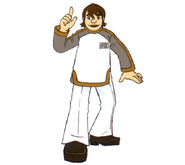 Tadashi Hikari in Mega Man NT Warrior (manga).
Add a photo to this gallery
Retrieved from "https://megaman.fandom.com/wiki/Tadashi_Hikari?oldid=338744"
Community content is available under CC-BY-SA unless otherwise noted.