Recently, it's come to my attention that this article is pending deletion. So, my question is, why? I know for a fact that fangame articles are allowed on this wiki, since there's a category that was made specifically for them. The Mega Man: Triple Threat article and all the others were acceptable, so why isn't this one?

Actually, nevermind. The issue has already been taken care of.

Whoever made this game is a dumbass; Nitroglycerin explodes upon being moved, so technically, he would explode upon movement. CrackLawliet 22:37, March 8, 2010 (UTC)

I guess I can't use the name Jat Man anymore.

Technically I still could, but it would be better not to use a name that's already been taken, even by another fangame.

oh, and, @CrackLawliet: Guess what? Bubbles aren't made of lead, nor do they travel along floors. are you calling INAFKING a dumbass? ITS A FUDGING GAME

Why can't we create pages for each of the robot masters? Official artwork is out, weapons/weaknesses are out, Likes/Dislikes are out, sprites are out and even the battles with some of them are out. They deserve own pages!

I'm really glad someone updated the robot master weaknesses for this fan game. None of the old weaknesses worked in my playthrough, so I experimented with powers and found the correct order (not looking at this article before doing it). I will be uploading my playthrough of the game. I discovered something interesting: Yoku Man is actually weak to his own weapon. Ranger-X, gamer and strategist 14:32, July 16, 2013 (UTC)

I made a Damage Data Chart for the game yesterday and today. I'm not feeling terribly ambitious about converting all that data and putting it onto the page, but if someone else is willing, go right ahead and use what I have: http://bombch.us/GpH

Hello everyone, this is MegaRed225, a Mega Man MEGA FAN.

Today, I'm here to talk about a new theory with Whirlpool Man. I tried many weapons on him but is not weak enough to them! He's even immune to Comet Dash and Nitro Blast, but luckily, Glue Shot works the best, so let's just say it's his weakness. I didn't calculated the damages it takes, but let's just say 5-7 damages or between. Also, the 1.2.1 Update is buttkicking!! TRUST ME! You must play Endless Attack Mode and Endless Attack Boss Mode. And the robot masters from Mega Man 1-6 made a cameo in one of the rare levels in Endless Mode.

The new update is out!! I guess you can play as Z-Prototype now, P.S, he's very awesome and strong! The Flaw about him is that he can't climb walls. 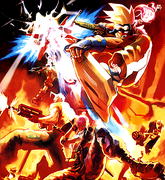 Action Shooting Games Cannon Spike.
Add a photo to this gallery
Retrieved from "https://megaman.fandom.com/wiki/Talk:Mega_Man_Unlimited?oldid=249838"
Community content is available under CC-BY-SA unless otherwise noted.