Tama (タマ, Tama) is a giant cat robot mid-boss in Mega Man 3 that was originally created by Dr. Light for a cat exhibition. They only appear in Top Man's stage in Mega Man 3 and Mega Man II, and there are only two Tamas in both games, blocking the path.

Tama attacks by throwing two bouncing yarn-like balls (one in Mega Man II) from its mouth that Mega Man needs to avoid. If the yarn balls are gone (either by being destroyed or going off-screen), Tama launches three small robot fleas from its back, which jump in Mega Man's direction. If the fleas are gone, Tama releases yarn balls again, repeating the attack pattern. It is weak to Hard Knuckle. In Mega Man 3, it is not possible to proceed in Top Man's stage without destroying them, but in Mega Man II, Mega Man can pass through them (being damaged if doing so) and slide in the opening below the second Tama. Unfortunately, in the Sega Mega Drive game, Mega Man: The Wily Wars, touching Tama will kill Mega Man in one hit.

Amount of shots/hits from Special Weapons it takes to destroy a Tama and a yarn ball.

Tama is a grey robot cat with yellow eyes that gets scared off by one of the dogs in the episode "A Tale of Two Dogs".

A Tama first appeared on the Variant Cover of Mega Man #40. In the next issue, Top Man was hiding in a secret asteroid station and waiting for Mega Man, having a Tama as part of his defenses. However, Mega Man and Rush easily defeated the Tama and its Fleas. Another Tama appears in the Short Circuits from Mega Man #46, where it is too heavy for Dr. Wily to stroke, and one also appears in the Sky Patrol's Training Room with the other Wily Bots from the first three games in Worlds Unite.

Tama has a brief appearance in the Rockman World 2 manga. 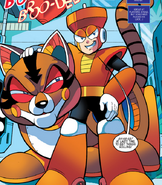 Tama in the Rockman World 2 manga

"Tama" is a common name for cats in Japan. While tama has multiple meanings, in this case it is usually associated with a "round object" that cats like to play with.