Tango (タンゴ, Tango) is Mega Man's feline pet created by Dr. Light in Mega Man V to assist him in the battle against the Stardroids.

Tango appears in Mega Man V and Rockman & Forte: Mirai Kara no Chōsensha as a weapon. He rolls toward the screen to attack enemies and vanishes when the energy is depleted, when falling into a pit, or when the player leaves the room where Tango was used.

In Mega Man 10, Tango appears napping or playing on the counter of ?????'s shop when playing as Proto Man.

Tango has short appearances in the manga titles Mega Man Megamix, Mega Man Gigamix, and Rockman Remix. His design is largely the same as his game-design, minus the cat snout in favor of a more anime-like face. He seems quite fond of Proto Man, offering support for him whenever possible.

Originally created as a pet robot, Tango was modified to be able to assist Mega Man in combat situations. With a build based on that of a cat, Tango enjoys a high level of agility—but because of those same feline design elements, he also has a powerful wanderlust, which means he will wander off without warning for days at a time. So far, Tango has always returned home on his own eventually.

Tango has short appearances in Mega Man Megamix, having a fight against Snake Man alongside Beat in "Metal Heart" and napping in "The Grim Reaper of Resurrection". In "The Greatest Enemy in History", he is shown to be able to transmit what he sees to Eddie. Tango helped Cut Man and the other Robot Masters find Mega Man, and after Roll recovers from her injury, Tango awakens her.

In Mega Man Gigamix, Tango tries to help an agonizing Proto Man by bringing an Energy Tank for him. During the Stardroids attack, Tango tries to protect Proto Man and is injured. Tango awakes Proto Man by licking him, and stops working after some time. Proto Man thanks Tango and wraps the inactive cat's injure with his scarf before leaving for the final battle against the Stardroids. After the battle, Tango is found by Roll and she desperately takes him for Dr. Light, who calms her by saying that he can be repaired.

Tango appeared in the Worlds Collide crossover with Sonic the Hedgehog, which is set in the future as the main comic, at the time, was yet to start the events of Mega Man 3, while Worlds Collide happens after Mega Man 10. In this series, Tango also seems rather fond of Proto Man, purring against his leg and following him as he is taken in for repairs by Roll. During Mega Man and Sonic's fight in Mega City, Tango allied with Mega Man as backup. His ramming ability was also mentioned to be similar to Sonic's, to the latter's annoyance.

Tango also makes an appearance in the 46th Short Circuits strip, where he is seen napping on Doctor Light's lap as the latter reads his book.

Tango has two cameo appearances in the Rockman & Forte manga, first being shown in the same room where Dr. Light is repairing Proto Man after he was cut by King, and later walking around the lab. 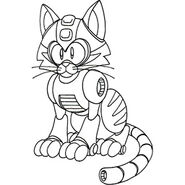 Tango in the Mega Man comic.