Mega Man 11
Tank Oven (タンクオーブン, Tank Oven) is a cooking robot appearing in Mega Man 11 as an enemy. It originally served to cook meals at Torch Man's campsite before being modified by Dr. Wily for combat. In the game, the Tank Oven attacks by slowly rolling towards Mega Man, with their tank occasionally opening up to reveal a potato robot inside which throws a carrot bomb. The tank is indestructible, so to destroy a Tank Oven, Mega Man must shoot at their potato robot pilot when it's exposed. However, Tank Ovens typically appear near bottomless pits, so they can also be disposed of by pushing them down a pit. This can be done by pushing a Tank Oven back with charge shots or Pile Driver until it falls. Tank Ovens appear in Torch Man's stage and Gear Fortress Stage 2. 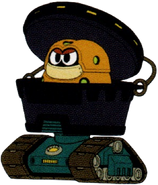