"Sigma is good at toying and controlling people's hearts. He took advantage of my heart and made me work for him."
―Techno, Mega Man Xtreme

Techno (テクノ, Tekuno) is a character from Mega Man Xtreme and the twin brother of Middy. He is a skilled hacker, who was manipulated by Sigma into using his skills for evil. Techno and the Shadow Hunters hacked into the Hunter Base's Mother Computer mainframe, setting its data to cause chaos all over the world and reproducing fighting data from past Mavericks.

Techno, alongside Middy, is revived by Sigma during Worlds Unite as part of his large Reploid army. 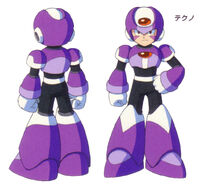