Teleportation is used by several robots for transport by using an external transportation system, such as the ones present in the final stages of most platform Mega Man games, where the player has a rematch against bosses and, in some cases (Mega Man: Dr. Wily's Revenge), a fight against new bosses. In the original Mega Man series, some rooms have the text "Dr. Wily Teleport System" in the background.

It is implied that some robots (mainly playable characters) have a teleporting device installed in their bodies, as they teleport between areas without using an external machine.[1] However, teleportation devices like the one used in the Resistance Base can teleport any person without a device to its position, as long as the person's coordinates are known and there is no interference.[2][3] Also, the Mega Man ZX series shows that portable teleport devices exist, at least in that era.[4]

Although the games usually only show robots teleporting, humans are also able to do so, as shown with Dr. Wily and Kalinka in Mega Man 4, and Ciel and Neige in the Mega Man Zero series. Teleportation uses a large amount of energy.[5]

Besides being used to reach or leave distant locations, teleportation was also shown being used in short distances or even the same spot. In the secret Versus Mode from Mega Man 7, Mega Man and Bass can perform a "Faint Warp" that makes them invincible for a short moment. Mega Man's down taunt in Super Smash Bros. for Nintendo 3DS / Wii U has him teleporting out and back in an instant, being immune to damage in its brief duration. However, as a short taunt, it is not as practical as a normal dodge.

In Mega Man X: Command Mission, teleportion devices are used to travel between the different areas of Giga City, and in the beginning the Maverick Hunters use mobile teleport pods to enter the island unnoticed. Sometimes, in the beginning of random encounters, the player's party will teleport to make a preemptive strike.

This uses a form of Matter to Energy Conversion to directly move the object, as a beam of pure energy, from one spot to another. This is most likely accomplished by usage of a satellite network. This method is usually seen in the beginning and end of stages.

The external appearance of this method is that the user splits into two semitransparent images which separate then disappear. This is usually accomplished by use of a capsule, so it is possible that the images are simply an aftereffect of the actual teleport. A variation exists where the user seemingly descends down to the ground repeatedly before becoming whole, with each "descent" growing faster in frequency.

The Reploid disappears as a haze of grey squares that expand and disappear, then reappears almost instantly. As only Magna Centipede used it, and only to certain designated points in the room, it is unclear whether it is a property of the room or an internal ability. It is also uncertain how it is performed or even if it uses technology, considering Magna Centipede's ninja-like abilities.

The Reploid disappears as a shape of light. Appears to be a variant on Beam-type Teleportation.

"Let me explain. A Trans Server basically moves something to someplace. It can transfer you to wherever you have been."
—Resistance soldier

Transerver (トランスサーバー, Transerver), also known as Trans Server, is a device from the first Mega Man Zero game and the Mega Man ZX series that can be used to recover health, save game data, and teleport to other transervers known by the user. Transervers are scattered throughout several locations,[6] allowing the user to move from one area to another faster.

Though teleportation isn't used regularly in the series, Wily invented teleportation chambers in the episode "Bot Transfer", as well as using one to transfer Mega Man and Snake Man's programming into each other.

Teleportation is used by Mega Man and other robots, but humans were unable to teleport early in the series.[7] Teleportation was later perfected so this won't be a problem.

In the altered Earth from the crossover Sonic & Mega Man: When Worlds Collide, Dr. Light perfected the teleportation system many years ago, and humans can safely teleport. However, anthropomorphic creatures like Sonic the Hedgehog end up feeling sick.[8]

When Ra Moon caused a global blackout, Break Man was able to reach the Lanfront Ruins by using satellites to do several short range teleportations, but still needed to do some walking due to the teleporter array being barely functional.[9]

During Legends of the Blue Bomber, Rush carried eight small but powerful teleporter harnesses that were meant to be used only for teleporting the Energy Elements back to Light Labs. After Mega Man defeated Top Man, Wily suggested to send Top Man's I.C. Chip alongside the Energy Element, but he didn't wish to risk have the I.C. Chip damaged as the teleporters were specially developed only for a specific object.[10] However, Dr. Wily would later use the eight harnesses to teleport himself and Gamma to his new castle, draining all of their energy.

Tele-harnesses were also developed as a stopgap measure to allow for humans to teleport by the time Dr. Wily was recruited into the X Foundation, with the harnesses being similar in shape to a bracelet. Wily had Break Man, when abducting Kalinka Cossack in an attempt to force her father, Dr. Mikhail Sergeyeovich Cossack, into cooperating in his latest world domination plan in a manner that made it seem as if Cossack was trying to take over the world, place a tele-harness onto Kalinka.

In 21XX, teleportation was still practiced, with Zero using it to apprehend an Emerald Spears member from behind when he was about to shoot X.

In "Asteroid Blues", Dr. Wily discovered how to make teleportation possible during his time in prison, leaving his cell full of scribbles of his calculations. He used this new knowledge to secretly create a teleportation chamber (saying it was a reserve energy tank for Gamma), which allowed him to to sneak on and off the ship he was being held to a prototype on his hideout, allowing him to create new robots and use them to gather the Energy Element on Earth and the alien technology on Asteroid Alpha. Dr. Light is notably surprised by this turn of events, as teleportation in this continuity is still considered theoretical. 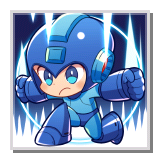 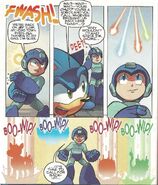 Teleportation in Sonic the Hedgehog #248. 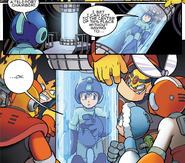 A teleport chamber in Mega Man #4. 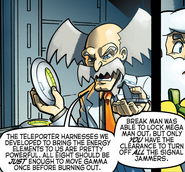 Dr. Wily holding an Energy Element and a teleport harness in Mega Man #45. 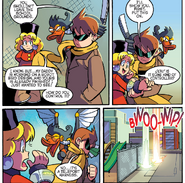 A teleport harness in Mega Man #54.

Zero teleporting in the first part of Dawn of X.