Tengu Man (テングマン, Tenguman) is a Robot Master from Mega Man 8. Originally built as an experimental robot that can generate artificial typhoons, he was modified into a combat robot by Doctor Albert W. Wily. He is modeled after the Tengu, a Japanese yōkai.

Tengu Man is equipped with a razor-winged jet engine on his back that grants him high-speed flight, a retractable triple-bladed fan weapon (also known as a Ha-Uchiwa) on his arm, and the ability to summon cutting blades of air and whirlwinds with Tornado Hold to trap and blow his opponents to their doom. He is one of the few Robot Masters to grant two different Special Weapons on separate occasions.

Tengu Man is highly proud of his large nose, is good at reading the atmosphere, and likes fly fishing. He looks down on others and fights with boldness, having noticeably arrogant and overconfident mannerisms.

Tengu Man is one of the first four bosses, and is stationed within a high mountain range in Japan. Mega Man defeats him and obtains Tornado Hold and one sample of the Evil Energy. His weakness is Ice Wave.

Tengu Man is a member of King's army. His stage is one of the two stages unlocked by defeating Ground Man. When defeated, the player obtains the Tengu Blade. He is weak to Spread Drill.

Tengu Man's stage is high in the air, Mega Man requiring to use Rush at one point to proceed.

Tengu Man's stage appears to be high in the air. In the beginning, Mega Man or Bass must use balloons to proceed and get inside an area with pipes. In the Japanese version, Roll mentions that it is a weird stage for a tengu-like robot, and it makes a great conversation topic.

Displays the amount of damage in units that Tengu Man will receive from each Special Weapon in Mega Man 8 and Mega Man & Bass.

*Damage values listed on this chart assume the player does not have the "C. Attack" (Counter Attacker) item equipped and activated.

Tengu Man makes his debut in the Worlds Collide crossover event with Sonic the Hedgehog. He appears as part of an army of Robot Masters who battle Mega Man, Sonic the Hedgehog, and their allies in the Skull Egg Zone, and is most notable for having been hit heavily by an attack from Rouge the Bat. This all took place in an altered reality created after Wily and Dr. Eggman fired off the Genesis Wave.

He also has two cameos in Mega Man Issue 55.

Tengu Man was responsible for generating the typhoon covering Wily's secret flying hideout. When Duo enters the typhoon to find the Evil Energy and is followed by Mega Man, Tengu Man keeps him away with his wind. After some struggle, Mega Man manages to stop the typhoon and fights against Tengu Man as Super Mega Man. Although heavily damaged, Tengu Man angrily takes Mega Man and dives to crush him on the impact. Mega Man uses Flash Bomb to blind Tengu Man, making him release Mega Man. As Tengu Man opens his eyes, he sees Mega Man ready to fire a charge shot, which destroys him. Mega Man floats on the water tired and is rescued by his friends.

Tengu Man later appears again inside the Wily Tower, where he has a fight with Pirate Man and both disappear.

Tengu Man is shown to have joined King's army to exact revenge on Mega Man for disgracing him in their previous battle, making Astro Man lure him to trap while he is flying with Rush and a Met. After convincing Astro Man to stop fighting, Tengu Man knocks him down, revealing that they are in a platform flying high on the air. At first Tengu Man has advantage, but Bass appears and weakened him before being forced to leave due to Treble having low energy. As the platform starts breaking, Mega Man manages to defeat Tengu Man with the Met's help before falling to their doom. However, Astro Man secretly rescues Mega Man and the Met, and they are found by Rush.

Tengu Man has a cameo appearance in the end of Mega Man Gigamix. 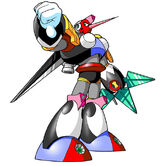 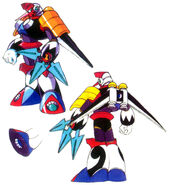 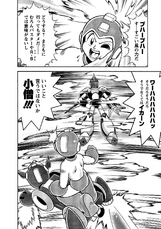 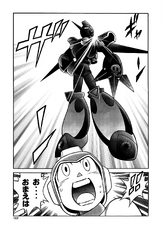 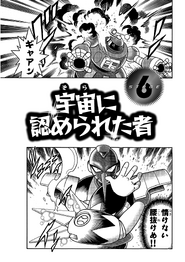 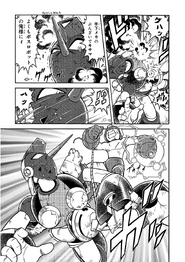 Tengu Man in the Rockman & Forte manga.
Add a photo to this gallery

Retrieved from "https://megaman.fandom.com/wiki/Tengu_Man?oldid=272831"
Community content is available under CC-BY-SA unless otherwise noted.