Tenkuuha, or Tenkūha (天空覇, Tenkūha lit. "Aether Rule") is the special technique and Z-Saber upgrade that Zero learns after defeating Storm Owl in Mega Man X4. This technique is based off Storm Owl's ability to absorb damage from some types of energy attacks. This technique changes the color of Zero's saber to a violet color, allowing him to destroy energy projectiles with it. The Z-Saber does not become any stronger with Tenkuuha and there is no way to deactivate this feature, which is similar to the Kuuenzan's; once learned, the Z-Saber permanently becomes purple with Tenkuuha activated for the rest of the game.

The ability is reused as an upgrade for Zero's black armor (with some extra enhancements) in Mega Man X5, and as the Shot Eraser upgrade in Mega Man X5 and X6. It also appears as a skill in Project X Zone. 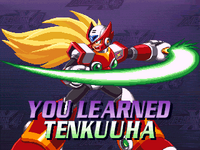 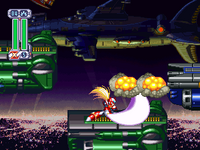 Zero demonstrating Tenkūha.
Add a photo to this gallery

Counterpart to this Technique

Retrieved from "https://megaman.fandom.com/wiki/Tenkuuha?oldid=331896"
Community content is available under CC-BY-SA unless otherwise noted.