Terry Jomon, known as Teruo Jōmon (上文テルオ, Jōmon Teruo) in Japan, is a character from Mega Man Battle Network 4. He is a robot specialist, but a poor NetBattler. His NetNavi is SparkMan.EXE and his grandfather is the Chief of JomonElec in Elec Town.

He is ruthless in his goals and is willing to cheat in order to win. He believes that "Winning's all that matters". Terry is also devious enough to trick Lan, successfully stealing all his Battle Chips. He is bad tempered and ready to blame his NetNavi for his failures even though he shared in the failure. Terry is also snide and mocks Lan before the match. Also, he is proud that his grandfather is the Chief of JomonElec.

Terry is one of the participants in the Den Battle/City Battle Tournament. He sends Lan a fake e-mail offering free PET maintenance. Terry meets with Lan and sabotages his PET preventing him from using any of his folders, but the one containing weak Battle Chips. However, Terry dropped a coded message describing how to fix it. After Lan meets Terry's grandfather, he discovers that the message was a clue to unlocking the code.

After fixing the PET, Lan NetBattles Terry after a brief argument since Lan recognizes him. MegaMan defeats him and Terry starts blaming SparkMan for his defeat while SparkMan blames Terry. When Lan demands that Terry apologizes to SparkMan, Terry reveals that he is a robot specialist and only joined the tournament so his grandpa would fund his projects. He boasts that his grandfather can get him a stronger Navi. Terry's grandfather then appears to break up the argument. When Terry claimed that he fought his best so that his grandfather can fund his projects, his grandfather is angry that Terry tried to cheat and could not accept defeat by blaming his Navi. Terry's grandfather states that he is through taking care of Terry and then apologizes to Lan for what his grandson put him through while blaming himself for spoiling Terry. As Terry's grandfather takes his leave upon stating how corrupt his grandson is, Terry is last seen running after him begging for forgiveness while vowing to change his ways. 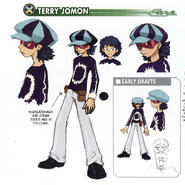 Concept art of Terry Jomon.
Add a photo to this gallery

Retrieved from "https://megaman.fandom.com/wiki/Terry_JoMon?oldid=296592"
Community content is available under CC-BY-SA unless otherwise noted.