Tesla Magnets (テスラ・マグネッツ, Tesura Magunettsu) is a character in the Rockman.EXE anime series, debuting in Stream. She is the new operator of MagnetMan.EXE, whom she took from her father, Gauss. She is a member of the Electel family, and the biological niece of Jack Electel, the niece-in-law of Ann Electel, and the granddaughter of Tesla Zap. When merged with MagnetMan, Tesla becomes C.F. MagnetMan.

For the majority of Stream, Tesla acts as the primary antagonist as the leader of the Neo WWW, causing chaos and trouble for Netto Hikari and his friends before eventually joining them due to the circumstances. She is a supporting character in Beast and Beast+, where it is shown she has started a relationship with Charlie Airstar.

Unlike her video game counterpart, who despite her snobbish and uncaring attitude still joined Team Blues and fought on the side of justice against Nebula, Tesla is the main antagonist in the first half of Stream as the leader of the Neo WWW, continuing her father and Dr. Wily's criminal ways. It was only after Dark Rockman steals her company from her that she joins the other Cross Fusion Members and fights against Duo, though after the crisis was dealt with, Tesla doesn't return to a life of crime, despite still proclaiming to be the leader of the Neo WWW.

Tesla is a spoiled and selfish woman who demands thing go her way, doing things such as spending an entire week celebrating her birthday and having her Neo WWW members gift her extravagant gifts each day, only to lose her temper when they run out of gift ideas. She does not have any problems being intrusive when she needs help, such as when she begins staying at Charlie's apartment without his consent (or knowledge) with her father after the Neo WWW fell, and continues to live there afterward. Tesla will go to great lengths to cause destruction, having once hijacked the Yggdrasil Orbital Elevator threatening to crash the satellites controlled by it into the Earth unless the world bends to her will. Even after joining the Cross Fusion Members, Tesla only did so out of her own self-interest and needed to be coerced into fighting alongside them when she was needed.

She is 29 years old, and flies into a rage when called old and insists she is still in her 20s, at one point going as far as attacking the NetPolice for the sole purpose of getting revenge on them for mistakingly listing her as 30, attacking Nenji Rokushakudama and Netto Hikari in the process when Nenji asks Netto "who that old lady was".

Tesla and Charlie form a bond over the course of the series, and despite Tesla being the leader of the Neo WWW, Charlie continues to help her and tries to have her stop her criminal ways. Though she states she is still leader of the Neo WWW in Beast, it is shown after that after Stream the two entered into a relationship.

Tesla seems to have contempt for her father for unknown reasons. When she broke him and MagnetMan out of prison, she states that she only broke him to get to MagnetMan, and confiscates her father’s NetNavi from him before making him the housekeeper for the Neo WWW.

She appears in episode 23.

Tesla makes a cameo appearance in the series finale, arguing with Charlie before the two are turned into cached data by Cache. When Netto and Rockman defeat Cache, she is restored along with the rest of the world. Netto + Rockman 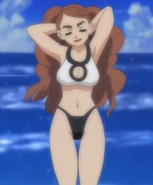