The Bluster Bunch is a trio of air-themed robots in Mega Man: Fully Charged who are Air Man's siblings. They first appear in The Bluster Bunch. They are very similar to Air Man in terms of design, ability, and personality. Their bodies are shaped just like Air Man's with only minor cosmetic differences, they all share Air Man's wind-generating powers, and they are all arrogant.

Mary Flair is Air Man's sister. She is colored magenta and turquoise, has no visor, and her fans are a different shape from Air Man's. She's a renowned movie director (or "award-winning special effects artist/director/writer extraordinaire" as she puts it) who specializes in making disaster films, and she doesn't like when other people or robots mess with her movies.

Volt Aire is one of Air Man's brothers. He's colored black and red, has a green visor, and has no fans. His a genies inventor and engineer that works on environmental and power projects, such as a wind farm that he built in Silicon City. Although he has no fans, he can still fly.

Captain Dare is Air Man's other brother. He's colored gray and dark blue, has an orange visor and blue tail fins on his shoulder and fore arms, and he has a single rocket thruster instead of fans. He's a famous stunt pilot who puts on shows for people in Silicon City and test new flying equipment.

Mega Man encountered the Bluster Bunch one by one while he was responding to a series of wind-related disasters in Silicon City. He stopped all of the windstorms and rescued each of Air Man's siblings from the danger, but they all chastised him for minor mistakes he made, which caused Mega Man to think less of himself because he was using Air Man's schematics and the Bluster Bunch's harsh criticisms were hurting his ego. After helping the last of Air Man's siblings, Captain Dare, Mega Man and Suna began to suspect that someone was trying to sabotage the Bluster Bunch, so they asked Captain Dare how many siblings he had. Captain Dare revealed that Air Man was also a sibling of his, and was the black sheep of the family. Air Man then showed up, happily declaring that he was indeed the saboteur, and that he did it to remind everyone that he was the best. He and Mega Man began to battle.

After fighting for a while, Air Man explained to Mega Man why he tried to sabotage the Bluster Bunch. In the past, Air Man had wanted to be a part of the Bluster Bunch, but they always shunned him because he apparently had no real goals or aspirations, so he decided to get revenge on them. Mega Man took sympathy on Air Man and conceded that the Bluster Bunch should've been more supportive of him. He encouraged Air Man to try and patch things up with his siblings. Air Man knew what Mega Man was telling him was the right thing to do, but he didn't want to take his advice and flew off, while the Bluster Bunch went back to doing their own things. 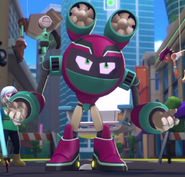 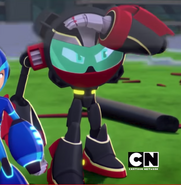 Captain Dare
Add a photo to this gallery
Retrieved from "https://megaman.fandom.com/wiki/The_Bluster_Bunch?oldid=282305"
Community content is available under CC-BY-SA unless otherwise noted.