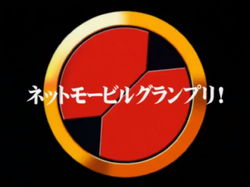 The NetMobile Grand Prix!, known as Net Mobile Grand Prix! (ネットモービルグランプリ!, Netto Mōbiru Guran Puri!) in Japan, is the forty-seventh episode (37th in the English dub) of the MegaMan NT Warrior anime. It originally aired on January 27, 2003 in Japan.

AyanoTech is hosting a NetMobile Grand Prix in NetCity! MegaMan and his friends, plus World Three and the Net Agents, all compete to see who has the fastest NetVehicle! But the winning car will have to be more than just speedy, because in this race, anything goes, including using BattleChips to sideline your opponents. It's all legal! And, as if driving under those conditions weren't tricky enough, the CutMan Brothers, who vowed to take revenge against MegaMan, join the race and create utter mayhem! In all the confusion, who will take the lead and win?![1]

AyanoTech has developed vehicles specially for NetNavis, the NetMobiles, and a race is held to promote them. While eating at the #1 Curry restaurant, Yai invites her friends (Lan, Maylu, Dex, and Tory) to participate in the race, and they agree. The WWW members (Mr. Match, Count Zap, Maddy, and Yahoot) hear about it, and they ask to participate so they can promote the #1 Curry and revive the WWW, and the NetAgents (Commander Beef, Black Rose, and Mysteriyu) enter to make sure the WWW doesn't succeed. The CutMan Brothers had set a paper flea spy on Rush and also hear about the event, and they decide to get rid of MegaMan during the race. During the day of the Net Mobile Grand Prix, Chaud and ProtoMan enter the race with the NetBike developed by BlazeQuest to compete against AyanoTech's NetMobiles. The NetMobile GP prize is a kiss from the internet idol Aki. Both GutsMan and IceMan want the kiss while Roll wants to win so that MegaMan wouldn't get the kiss himself.

During the race, GutsMan takes down NumberMan's NetMobile with Guts Hammer. Mr. Higsby complains to Dex about this, but according to the rules, it is okay to attack other racers. IceMan uses Blizzard to freeze the floor inside a tunnel, causing GutsMan's Guts Tank to slip. As he was close to Roll's car, GutsMan destroyed his own NetMobile to avoid crashing on her. On the other side of the tunnel, the CutMan Brothers prepare an ambush for MegaMan from the right side of the road, but all cars go out from the left side. Most vehicles manage to pass a bascule bridge, but the NetAgents' NetMobile falls in the water. The CutMan Brothers try to take down MegaMan again, this time planting a time bomb below his NetMobile, but CutMan Vinny is run over by MegaMan and isn't sure if he succeeded. The WWW's train changes from a steam train to an electric train to gain speed, and they start attacking the other competitors, taking down the Battle Bus piloted by Glide and IceMan. The other users accelerate in passing them and when the NetAgents try to return to the race, they accidentally hit the WWW train and their vehicles are destroyed.

In the final lap, only MegaMan, ProtoMan, and Roll are left. With less than 50 seconds left, the CutMan Brothers realize that their time bomb was on the back of Vinny, and they try to take it off. In the race, Roll manages to get the lead, but one of her NetMobile's tires burst, causing it to spin and crash. MegaMan and ProtoMan pass her, and they both cross the finish line at the same time. The bomb on the back of Vinny explodes, blasting them away and creating some fireworks. When checking the photo to see who won, Rush is seen flying above the NetMobiles, and he is considered the winner, surprising and confusing everyone.