"I... Can't do that, Xander is my brother. He was always there for me when we were kids. He needs me now."
―Theo, Mega Man Issue 21 (Archie Comics)

Theo Payne is a character from the Mega Man comic series by Archie Comics. He is a member of the terrorist group Emerald Spears. He is Xander Payne's brother and works with his girlfriend Simone Miller.

Theo is apparently Xander's closest relative, as he was approached after Xander was injured by Elec Man by the doctors attending his brother. He approved their suggestion to have Xander's lost eye replaced with a cybernetic implant, only to be confronted by his enraged brother upon Xander's recovery. The pair subsequently ended up as members of Harvey Greenleaf's Emerald Spears, along with Simone Miller, whom Theo became close with. The trio were among the Emerald Spears operatives who attacked the Advanced Robotics Trade Show, during which Xander overthrew Harvey due to the latter's unwillingness to employ violence against humans in favor of robotics. They were then the only members of the Emerald Spears to escape capture by the police.

Theo later joined his brother and Simone in planning another attack on New Year's Eve, which involved turning the a New Year's drop ball into a gigantic bomb. Theo proved more moderate than his companions, not wanting to harm innocent people, but the overzealous Xander convinced him that they were guilty of cooperating with the "evil" of robotics. Having set their explosives, they soon became worried by the presence of government Bladers, but remained in position to keep them away from the bomb. Simone soon asked Theo whether he thought they should leave, but Theo's loyalty to his brother prevented him from doing so. Simone surprised him with a kiss, calling him "stupidly loyal" before correcting it to "adorably loyal" after he questioned whether she had just called him stupid, and cited it as her reason for loving him. The pair were then surprised by officer Roslyn Krantz-with whom Simone apparently had a history-and taken into custody along with Xander. 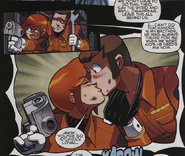 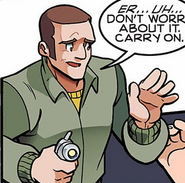 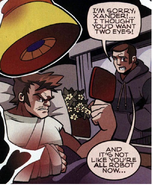 Theo visiting his older brother in the hospital.
Add a photo to this gallery
Retrieved from "https://megaman.fandom.com/wiki/Theo_Payne?oldid=300237"
Community content is available under CC-BY-SA unless otherwise noted.