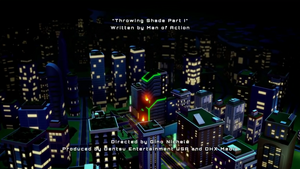 Throwing Shade Part I is the first episode of Mega Man: Fully Charged. It first aired in the United States on Cartoon Network on August 05, 2018. Two days earlier it was released within the Cartoon Network app.

At night, a building in Silicon City is on fire, and a human is stuck inside. A blue robot appears and saves the human, the new hero introducing himself as Mega Man. The next day, Aki Light and Suna Light talk about Mega Man's heroic deeds and wonder if they should reveal that Aki is Mega Man to their father, Dr. Light, deciding to keep it a secret for a while.

Later, Dr. Light goes to a school assembly, and Sgt. Night publicly criticizes Dr. Light's views on human and robot unity, invoking the ire of Fire Man and forcing Mega Man to intervene. As Fire Man is too strong for him, Mega Man copies his abilities to get more fire power, but is thrown far away before he has a chance to try his new powers. 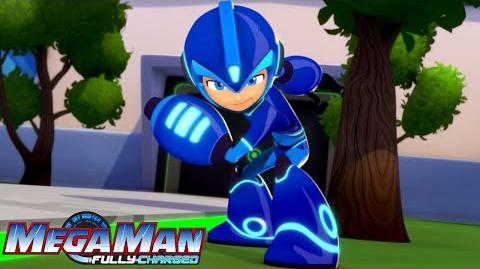 Retrieved from "https://megaman.fandom.com/wiki/Throwing_Shade_Part_I?oldid=277145"
Community content is available under CC-BY-SA unless otherwise noted.