Thunder Beam (サンダービーム, Sandā Bīmu) is Elec Man's Special Weapon in the Mega Man series. When used by Mega Man or other characters, three high power electric energy beams are shot in different directions, one forward, one straight up, and one straight down. It also has the ability to go through enemies and hit multiple times, making it a powerful weapon.

The Thunder Beam can break certain barriers that can otherwise only be removed by the Super Arm. Ice Man, Yellow Devil, Copy Robot, and Wily Machine 1 are vulnerable to this weapon.

In the NES version, it can make short work of the Yellow Devil and other bosses when mixed with the "pause glitch", allowing to hit them multiple times with one shot.

The Thunder Beam works like the original game in Old Style, but in New Style it can no longer destroy blocks and is Time Man's weakness. When playing as Elec Man, he can use Thunder Beam to charge Elec Blocks to make them move.

Like all weapons from the first three Mega Man games, Thunder Beam is available in the Wily Tower mode. It is most effective against the Iron Ball and Wily Machine.

The Thunder Beam works like its original appearance, with the addition of being able to damage Sniper Joes after passing by their shields. It is Ice Man's weakness. Bubble Man, Quick Man, Flash Man, Heat Man, Enker, and Wily Machine I are immune to this weapon.

After defeating Elec Man in the "Rescue Roll!" course, the Thunder Beam is obtained by the player that takes the Special Weapon Item dropped by him. It is the weakness of Dive Man, Yellow Devil, and the Wily Capsule.

Damage values in units from the original Mega Man.

Mega Man obtains Thunder Beam and uses it to defeat Ice Man in issue 3. He also uses it in issue 4. In issue 7, Mega Man copies it alongside the other five weapons from the first game, but he didn't use it. 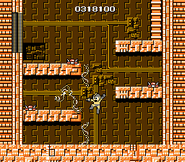 RS One Million Volt Thunder in the Rockman manga.