"An electrical weapon. Bullets will automatically ricochet to the next target."
―In-game text, Mega Man X8

Thunder Dancer (サンダーダンサー, Sandā Dansā) is what X gets from defeating Gigabolt Man-O-War in Mega Man X8. It's a short range (but strong) bolt of electricity, whose range gets extended to reach any nearby enemy. Once one enemy is hit, the bolt may connect to another nearby enemy, making it useful to fight several enemies at once. Its charged up version is still short range, but it sends out three bolts consecutively. This weapon also holds a rapid fire capability similar to the X-Buster, making its repeated use a good strategy against a large amount of enemies. Thunder Dancer is Avalanche Yeti's weakness. 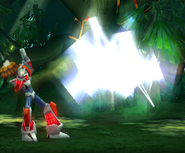 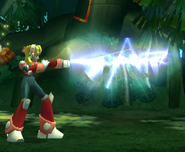 Alia using Thunder Dancer.
Add a photo to this gallery

Retrieved from "https://megaman.fandom.com/wiki/Thunder_Dancer?oldid=304982"
Community content is available under CC-BY-SA unless otherwise noted.