Thunder Slimer (サンダースライマー, Sandā Suraimā) is the sub-boss in Spark Mandrill's stage in Mega Man X and Mega Man Xtreme. It is a creature born from an experiment that had "how big can a single cell get?" as subject. It took 10 years for it to grow to its current size, being bigger than X.[1]

Thunder Slimer resides in the Power Plant and is encased in a huge blob of blue slime that protects it. It releases smaller blue blobs around the room that can glue X to the floor, making him an easy target to Thunder Slimer's attacks. Dashs and charge shots can free X if he becomes glued to the floor.

Under normal circumstances, Thunder Slimer can, in addition to throwing slime and doing a body slam, shoot bolts of electricity. Before using its electric attack, Thunder Slimer must recharge in the center of the ceiling. If Storm Eagle had been defeated before, the Death Rogumer will fall in Spark Mandrill's stage, causing the power plant to lose energy and Thunder Slimer won't be able to recharge, making the battle easier. It is weak to Rolling Shield, and Storm Tornado is also helpful as it can hit multiple times. After Mega Man X defeats Thunder Slimer, it explodes and releases a ton of slime balls out that are harmless to X.

Thunder Slimer appears in the digital reproduction from Spark Mandrill's stage. It fights in the same way as the original.

Thunder Slimer appeared as an unit card in TEPPEN.

Amount of shots/hits from weapons it takes to destroy Thunder Slimer.

Thunder Slimer appeared on the Rockman X manga on a power station controlled by Spark Mandrill. Thunder Slimer is the result of a top-secret experiment that was scrapped due to being considered too dangerous to control. As Spark Mandrill recovered it after it was abandoned, Thunder Slimer became very loyal to him. After being defeated by X, Thunder Slimer used its remaining strength to make part of itself jump on X to attack and protect its master before going offline.

Thunder Slimer also appears on the Variant Cover of Mega Man #40 and as part of Sigma's Mechaniloid army in the Archie Comics crossover Worlds Unite. 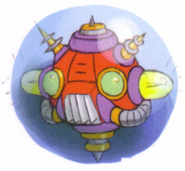 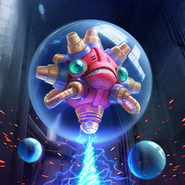 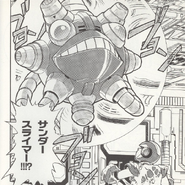 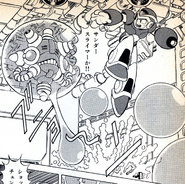 Worlds Unite
Add a photo to this gallery

Enemies similar to the Thunder Slimer:

Retrieved from "https://megaman.fandom.com/wiki/Thunder_Slimer?oldid=322217"
Community content is available under CC-BY-SA unless otherwise noted.