Thunder Zerker, known as Thunder Berserk (サンダーベルセルク, Sandā Beruzeruku) in Japan, is the Tribe On form of Mega Man after he obtains the power of the ancient Sword of Zerker OOPArt.

Thunder Zerker caries the large Sword of Zerker, which now blazes with electricity. The main color scheme is silver and yellow, topped with additional metallic armor parts. The buster head emits a green aura, and is designed like a knight's helmet.

Thunder Zerker is an adept and brutal warrior, striking down his enemies with powerful, stunning attacks with the Sword of Zerker.

Thunder Zerker is the main character from the manga. Instead of being a transformation from Mega Man, Thunder Zerker is a survivor from the Shooting Star Rockman Tribe that goes to the continent of Mu to face Rogue, the responsible for destroying his tribe when he was young. In the continent of Mu he finds other survivors from his Tribe, Wood Ninja and Fire Saurian, and they join forces to defeat Rogue.

Warrior Soul, known as Warrior Blood (ウォリアーブラッド, Warrior Blood) in Japan, is a Battle Card with a picture of Thunder Zerker, apparently representing the power of the Zerker tribe. When used, Mega Man gains Super Armor and the Mega Buster stats are maximized, but in exchange he is affected by a HP Bug. It can only be obtained by using a Wave Command Code on a Blank Card in Mega Man Star Force 2. 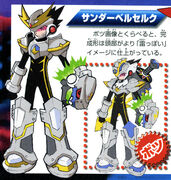 Thunder Berserk in anime.
Add a photo to this gallery

Retrieved from "https://megaman.fandom.com/wiki/Thunder_Zerker?oldid=288011"
Community content is available under CC-BY-SA unless otherwise noted.