MMKB
Register
Don't have an account?
Sign In
Advertisement
in: Articles with hAudio microformats, Reploids, Mavericks,
and 5 more

Guardian Deity of the Oceans
（大海の守護神）

Tidal Whale, known as Tidal Makkoeen (タイダル・マッコイーン, Taidaru Makkoīn) in Japan, also known as Duff McWhalen,[2] is a sperm whale-based Reploid from Mega Man X5. He held some jurisdiction over the North Atlantic Ocean, which the Maverick Hunters required to produce hydrogen for the Enigma laser cannon.

Tidal Whale is a Reploid who has a design meant to resemble a whale. He has the large forehead of a sperm whale, but also has coloration and lines across his neck indicative of a blue whale. He also possesses a tail, blowhole, and dorsal fin, common traits across all kinds of whales. His eyes are located on either side of his mouth.

Tidal Whale was the curator of an oceanographic museum and held rank as the captain of a maritime security force. Having a high sense of responsibility, he had the tendency to blunder into dangerous situations without a second thought, and this reckless behavior often earned him arguments with the Repliforce's navy. Whale became acquainted with the famous Maverick Hunter Zero during his duties as a security captain. He was already infected by the Sigma Virus when the Maverick Hunters arrived, and as a final request asks for a fight to the death. They accept, and terminate him in battle, giving the Reploid who loved the sea an end in the sea.

Whale stays on the right side of the screen and shoots out blocks of ice. The C-Shot and C-Sword will cut through these and also damage Tidal Whale, as they are his weaknesses. When enough of his energy is depleted, he will swim to the left side and fire ice blocks in rapid succession, trying to push X/Zero into the spiked wall on the right side.

Tidal Whale: Oh... Welcome, Captain X.
X: I'd like you to let us use this ocean since it's nearest to the Hunter Base. We need to produce large amounts of hydrogen.
Tidal Whale: Do you intend it for nuclear fusion? So, then you are going to use the good-old Enigma.
X: Y...yes... If you know that, then please cooperate with us.
Tidal Whale: X, I'm a man of the sea... ... And I will not allow you to use my sea freely... You might think I'm stupid, but you'll have to fight me!

X: I understand. I accept your challenge!!

Tidal Whale: Zero... Long time no see...
Zero: I'm here to secure the ocean nearest the Hunter Base. It has run high...
Tidal Whale: The Enigma requires a large amount of hydrogen... so you must want the ocean in order to produce hydrogen...
Zero: Precisely. Please cooperate.
Tidal Whale: I've already been infected... Shall we fight for old time's sake? A duel! And I'll show no mercy!

Tidal Whale: Zero... It's been a long time... But you are later than I expected. Tell me what's been happening on land.
Zero: ............
Tidal Whale: The world is facing extinction, right? Since I've also been infected with the Virus, why don't you fight me once before you die? A battle between two men! ...Expect no mercy!

Tidal Whale appears in the Rockman X5 manhua, where he battled Volt Kraken.

Tidal Whale featured in the Mega Man series from Archie Comics during the Worlds Unite crossover with the Sonic the Hedgehog comics. However, in this version he goes by his Japanese name Tidal Makkoeen, and is a duplicate of the original created by Sigma using the Genesis Portals and Unity Engines. Tidal Whale would later be seen in the world of Skies of Arcadia, facing against the Blue Rogues where it would be eventually destroyed by the combined efforts of the team.

He is also one of a handful of Mavericks to appear on a variant cover, where he is shown being shot at by E-123 Omega. 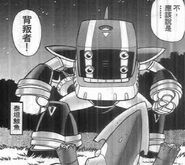 Developer Comments
This is a boss that got vetoed for X4. He got nixed because it was difficult to personify a whale. If he wasn't humaniform to some extent, he wouldn't look boss-like. I actually wanted to make him about as big as Kibatodos, but he ended up rather compact.[3][4]

Designer Comments
No matter how you tinker with a whale, it still looks like a whale, so I finished this one up comparatively easily. It's a bit of a shock, though, that even though he's a whale, he's smaller than a walrus (Kibatodos). While this guy was being developed, he got impossibly strong when his power dropped, making me feel like crying.[3][4]