"Flashy, but hollow words. Listening to such prattle is truly a waste of time!"
―Time Man, Mega Man: Powered Up

Time Man (タイムマン, Taimuman) is one of the two new Robot Masters from the remake of the original Mega Man from NES to the PSP: Mega Man Powered Up.

Time Man is a Robot Master created by Dr. Light for use in time travel experiments. However, he is only a prototype robot (as mentioned by Dr. Wily), since Dr. Light's time travel theory had not yet been perfected at the time, causing Time Man's functions to not be complete, and he is consumed by a crippling inferiority complex due to this. As a consequence, he takes on an irritable attitude - being overbearing, bossy, somewhat conceited, and is very obsessive over unnecessary perfection. He is completely obsessed with time and his schedules, keeping strict track of time (for example, stating Mega Man is 0.3 seconds early when they fight), and because of his strict and domineering personality, he won't put up with any idle or useless activities, taking others to task for their lateness. However, he also doesn't show any appreciation for the timeliness of punctual robots such as Ice Man. As seen in most of his conversations, he additionally tends to not speak much if he thinks it will waste time.

As a boss, Time Man is one of the eight robots reprogrammed by Dr. Wily to help him conquer the world. He can slow time with his Time Slow and attacks with arrow-like projectiles that move straight forward. Like the hands of a clock, his projectiles travel in different speeds depending on their size, the "hour" projectile being slower than the "minute" one. While Time Slow is in effect on Hard difficulty, he will also roll to dodge attacks and counterattack with a clock hand. His weakness is the Thunder Beam, which defeats him in five hits.

As a playable character, his primary attack is shooting twin projectiles shaped like clock hands at angles, one going upwards, one going downwards, making Time Man an awkward character to control attacks. However, this is counterbalanced by his ability to charge his attack; when fully charged, releasing the attack button will make him use Time Slow, which slows down time more than Mega Man's. He is able to charge again to the fullest while time is slowed, but if he releases it during the time, nothing will happen, and he must charge again for when the Time Slow wears off. He is also the only character capable of breaking Time-themed Break Containers.

The first out-of-game appearances Time Man had was in the Archie Comics Mega Man series.

Displays the amount of damage in units that Time Man will receive from each Special Weapon in Mega Man Powered Up.

Time Man: You're early for your appointment.

Time Man: Oh, joy. By being early, you have given us an extra 0.3 seconds.

Roll: Women need time to get ready, you know! If you didn't, then you're just a kid.

Time Man: Who are you?

Time Man: Hmph. I am perfection.

Cut Man: But you did wait for me, right? Then, let's go home together!

Time Man: Do you think you can fool time, you idiot?!

Time Man: You're late. It's out of the question. Go home.

Guts Man: No can do. You're coming back with me.

Time Man: You would waste even more time?

Ice Man: Yes, I am always very aware of the time when I perform my duties, sir.

Time Man: I have no interest in your "duties" or whatever else.

Bomb Man: Don't sweat the small stuff! I go by my party clock!

Fire Man: My justice is absolute! It waits for no man! Fiiire!!

Time Man: This will be over earlier than planned...

Elec Man: A fight is but a moment; an eternal moment... A moment of mesmerizing beauty...

Time Man: Look at my watch. You're late. It's out of the question. Go home.

Oil Man: I don't know nothin' about that! You're not the boss of me! I do what I want when I want!

Time Man: It seems you have no use for your remaining time on Earth. 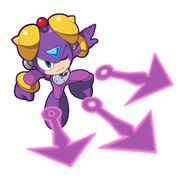 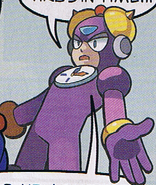 Retrieved from "https://megaman.fandom.com/wiki/Time_Man?oldid=274830"
Community content is available under CC-BY-SA unless otherwise noted.