Tiranos (ティラノス, Tiranos) is a triceratops-like enemy (despite the name sounding like Tyrannosaurus) in Mega Man X2.  Tiranos was originally an exihibition from a robot museum, but was modified into a tank-like Mechaniloid for ground warfare.  It moves back and forth across a small area, shooting miniature missiles from its horn when it detects X.

They mainly appear in Wheel Gator's stage, but they also appear in the third X-Hunter Stage and as an enemy summoned in battle by the Sigma Virus.

Tiranos also appeared alongside the Sigma Virus in Dragon Poker.

A Tiranos is seen alongside other Mavericks ready for Zero. More are later seen with Disk Boy 08s and Tubamail-Ss attacking the city on Wheel Gator's orders, and they destroy X's Ride Armor. 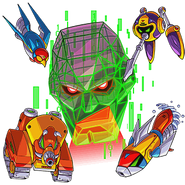 Tiranos with the Sigma Virus in Dragon Poker 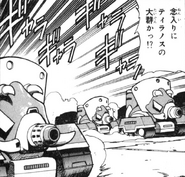 Tiranos in the Rockman X2 manga

Tiranos in the Rockman X2 manga

Tiranos in the Rockman X2 manga
Add a photo to this gallery
Retrieved from "https://megaman.fandom.com/wiki/Tiranos?oldid=305034"
Community content is available under CC-BY-SA unless otherwise noted.