Toad Man (トードマン, Tōdoman) is an agricultural Robot Master that was created by Doctor Mikhail Cossack for irrigation. When Dr. Wily forced Dr. Cossack to fight against Mega Man in Mega Man 4, Toad Man was modified for combat. His Special Weapon, the Rain Flush, is an unavoidable attack that brings a strong acid rain to a wide area. Like the amphibian he is based on, Toad Man can jump high.

Toad Man is one of the eight bosses. His attack pattern is very simple. It is also easily exploited, making him one of the easiest Robot Masters in the series. Toad Man will hop around the room, trying to land on Mega Man; the player should slide under him to avoid getting hit. He will occasionally stop hopping to attack with his Rain Flush, which consumes the entire area with acid rain. Though the attack does a great deal of damage, it can be canceled altogether by shooting Toad Man before the attack is used. His weakness is the Drill Bomb and if it is used on him, it will deal high damage, defeating him in seven hits. On the other side, the pattern is the same.

Toad Man is one of the first four bosses. His attack pattern is similar to Mega Man 4.

Toad Man is a balanced player that don't has his own team. In Tournament mode he is a member of the Cut Man, Wood Man, Needle Man, Dust Man, and Dr. Wily teams. In League mode he is part of the Needle Man and Pharaoh Man teams.

Toad Man is one of the bosses fought in the final stages. His strategy is similar to Mega Man 4.

Enemies in Toad Man's stages from Mega Man 4 and Mega Man IV, an area with rain and wind that pushes the player back and makes pitfalls more dangerous.

Amount of damage in units that Toad Man receives from each Special Weapon in Mega Man 4.

Toad Man appeared in the episode Robosaur Park from Ruby-Spears' Mega Man animated series. In the series, he had a mouth.

Toad Man is a farm worker robot capable of causing rainfall in regions suffering from a drought. His Rain Flush ability is comprised of a two-step process: the environmental preparation, then the actual rainfall. In step one, Toad Man emits a spray of high-pressure liquid. (The liquid in this spray is a special ionized colloidal mixture.) The resulting water vapor rapidly expands and reaches its freezing point in the atmosphere. In the second step, Toad Man sprinkles ice crystals into the forming clouds to force the development of rain. When working on farms, Toad Man mixed fertilizers and pesticides into his rain, but after being modified for combat in preparation for his battle against Mega Man, Toad Man instead created acid rain.

Toad Man first appeared in the story "Grim Reaper of Resurrection", which happens after Mega Man's battle against Dr. Cossack. When Skull Man attacked Dr. Cossack's Citadel, Toad Man is one of the three robots left behind, and he informs Mega Man what happened. He and Dive Man are repaired by Bright Man and they help Mega Man search Dr. Cossack.

Front, side, and back view of Toad Man. 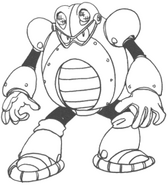 Toad Man in the Rockman 4 manga. 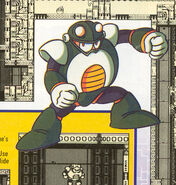 Toad Man + Gyotot figure.
Add a photo to this gallery

Retrieved from "https://megaman.fandom.com/wiki/Toad_Man?oldid=201551"
Community content is available under CC-BY-SA unless otherwise noted.