Togehero (トゲヘロ, Togehero) is an enemy robot from the Mega Man series which was originally an aerial patrol robot. They move in a slight wave pattern and extend and retract their spikes in those intervals. They appear in Skull Man's stage in both Mega Man 4 and Mega Man III, as well as in several sections of Dr. Cossack's Citadel in the former game. Togehero also have a brief appearance in Super Adventure Rockman, patrolling the area after Crash Man's defeat.

Togehero had brief appearances in the Rockman 4 manga. It also appears on the EFF Variant Cover of Worlds Collide's finale, as well as Mega Man Issue 40 (Archie Comics)'s Variant Cover. 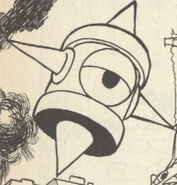