Tomahawk Man (トマホークマン, Tomahōkuman) is a combat Robot Master from Mega Man 6 designed with an Aboriginal North American warrior motif. Unlike the other seven Robot Masters from Mega Man 6, Tomahawk Man was built purposely for the First Annual Robot Tournament. However, he was reprogrammed by Mr. X to help him conquer the world, and was defeated by Mega Man.

His main weapon is the Silver Tomahawk, which he can easily throw and hit a target 100 meters away (328 feet, miscalculated as 30 feet in his English CD data), but it moves in an upward arch, leaving a safe area for the opponent. To compensate for this, he can also attack by firing feathers horizontally from his head-dress.

Tomahawk Man is very brave and courageous when it comes to battle, though he tends to be very strict and exclusive in not allowing anyone to know of his personal life-style. He is an expert horseback rider and doesn't like those who lie or deceive others.

Tomahawk Man serves as one of the initial eight bosses. Tomahawk Man's battle can be quite difficult, and most of his attacks require some prediction to be avoided. He jumps across the screen to move. He has three types of jumps: a high jump, a long jump (both of them avoided by sliding) and a fake jump, which is just a small hop to get near Mega Man. He attacks with the Silver Tomahawk and by shooting three feathers of his head-dress. Both can be avoided by sliding or jumping over at the right time. On the other hand, the player should only jump to avoid them if Tomahawk Man fires near Mega Man, and not jump if Tomahawk Man fires it from far away, as Mega Man will likely get hit due to the Silver Tomahawk going up or the feathers gaining distance between them.

Tomahawk Man appears twice in this game, first as part of a tribe with Napalm Man and Pharaoh Man. Later, he and Elec Man serve as bodyguards to Pisces in North-East Africa, in the level "In a Tornado". 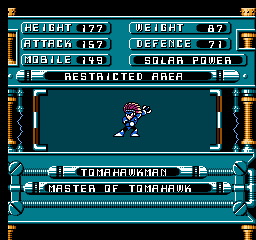 Mega Man Legacy Collection text: A robot developed for combat. His Silver Tomahawk's dead angle is covered with a jump attack, but you can slide under him when he does it.

Displays the amount of damage in units that Tomahawk Man will receive from each Special Weapon in Mega Man 6.

Tomahawk Man appears in the Archie Comics Mega Man series, appearing earlier than the story of Mega Man 6 by debuting in the Worlds Collide special event. He and most of the other Robot Masters from the classic Mega Man series appear as part of an army that attacks Mega Man, Sonic the Hedgehog, and their allies when the group arrives at the Wily Egg in the Skull Egg Zone.

In the manga series, Tomahawk Man is a combat robot that entered in the first World Robot Championship in the story "The Strongest Enemy to Date". Tomahawk Man and other seven competitors were reprogrammed by Mr. X to help him conquer the world, but they were defeated by "Mega Man". After Mr. X's defeat, the destruction of his base stopped the signal controlling them, and they are repaired by Dr. Cossack.

He appears in vol. 2 of the manga in the story "Moon of Darkness", where he is defeated by Pluto. He reappears repaired near the end of vol. 3.

Tomahawk Man also appeared in the manga Rockman 6 and Rockman 4Koma Dai Koushin, and a brief appearance in the Rockman & Forte manga. 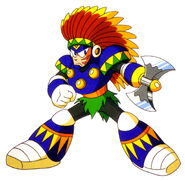 Front, side, and back view of Tomahawk Man. 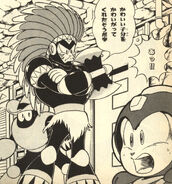 Tomahawk Man in the manga Rockman 6. 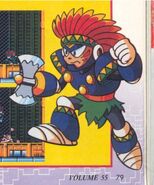