TorchMan, known as FireMan (ファイアマン, Faiaman) in Japan, is the NetNavi of Mr. Match and former antagonist in the MegaMan NT Warrior anime series. In the first season of the anime, TorchMan, along with ElecMan, WackoMan, and MagicMan worked for the WWW alongside their operators where they caused chaos for society and clashed with Lan Hikari and MegaMan. After the WWW is defeated and Grave rises in its place, TorchMan is deleted by FreezeMan and replaced by HeatMan temporarily, until he is revived. From that point on TorchMan and Mr. Match (as well as the other WWW members) become more like allies and friends to Lan and MegaMan, aiding them on several occasions against other criminal organizations and even hanging out with them, though they often wish for the return of Dr. Wily and the revival of the WWW.

This article is set to be rewritten to fit MMKB's standards. Please note that large changes will be made and that your edits may be heavily edited or erased.

Mr. Match uses TorchMan to attack ovens around the city to spread chaos and fear. He appears in the first episode controlling the oven in Lan's house and making it overheat by unleashing viruses. After MegaMan deletes them, he retreats. Later TorchMan attacks Maylu's oven but, fortunately, both MegaMan and GutsMan quickly intervene. MegaMan deletes the viruses, but TorchMan pushes them both back. GutsMan charges at him, but is forced to log out after taking too much damage from TorchMan's fire blast. After Maylu is rescued, Lan goes back into the house to help MegaMan. MegaMan uses Blaster to push TorchMan back, then a Cyber Sword to cut off his arm. TorchMan retreats and the fires stop. Jack In! MegaMan!

After his defeat, TorchMan is ordered by Mr. Match to delete MegaMan in a rematch to rejuvenate his spirits. He causes overheating electronics around the Net to lure out MegaMan, but MegaMan doesn't seem to notice. Mr. Match rages, but TorchMan raises the possibility that MegaMan may not know it's them, so Mr. Match sends him to deliver the message. However, he meets Roll and GutsMan instead, and gives the message to them. He waits at the Central Heating Grid and makes it overheat to create a volatile environment for their match. But MegaMan doesn't show up, leading to TorchMan admitting he didn't give the message directly to MegaMan and gets a scolding from Mr. Match. A NetNavi then logs in. TorchMan begins to welcome him, but realizes it is Roll. Roll challenges him, but TorchMan laughs at her. Roll gets mad and hits him with Roll Blast. She continues using Roll Blast, but TorchMan evades and teleports behind her and knocks her down. He mocks her and prepares to finish her off with a flame blast. However, at the last minute, MegaMan arrives and shoots his cannon. TorchMan and MegaMan then charge at each other, TorchMan with Flame Arm and MegaMan with Mega Buster. Both evade each other's attacks so TorchMan uses Flame Tower. The Central Heating Grid continues to heat up even more. MegaMan, Roll and GutsMan evade Fire Towers. Maylu uses Aqua tower which allows Roll to counter a Fire Tower, but TorchMan unleashes another fire tower more powerful than the one before. The trio evades, but it circles around and heads straight for Roll. MegaMan jumps in the way and takes the attack, becoming severely injured. As GutsMan and Roll rush to help him, TorchMan unleashes a tidal wave-esque Fire Tower. As doom approaches them, Roll calms down and asks Maylu for another Water Tower. She receives it from a hesitant Maylu and uses it to sends GutsMan through the flame. TorchMan is confident they are defeated and prepares to log out, as GutsMan comes through the flame and right into TorchMan, damaging his crest. Mr. Match panics and TorchMan logs out. The Heating Grid returns to normal afterward. Hot Tempers!

He then reappears during the N1 Grand Prix, where he first faces MegaMan and despite some new strength he loses. He and WackoMan team up again in a part of the tournament when losing players can reappear. The battle was in their hands after they put Roll under a form of mind-control. However, TorchMan and WackoMan fight after he accidentally shot the Navi, which resulted in the latter getting logged out and leaving TorchMan alone to fight MegaMan and the freed Roll. Luckily for TorchMan, he was able to log out. After the defeat of PharaohMan, Mr. Match goes after Lan for a rematch while Lan was traveling, but he only manages to reach a city after Lan had departed from it. Wacky Madness & Blazing Battles! (Part 1) Wacky Madness & Blazing Battles! (Part 2) Evil Empress Roll! (Part 1) Evil Empress Roll! (Part 2) The Great Curry Battle

During the attack of NetCity, TorchMan is deleted by FreezeMan. TorchMan's remaining data is combined with HeatMan's by Mr. Famous. TorchMan makes a short appearance while HeatMan was fighting against FreezeMan. The Virus Factory Crimson Flash!

TorchMan is revived in episode 7, when Mr. Match and HeatMan were fighting against VineMan. HeatMan turns back into TorchMan, and MegaMan uses Double Soul Torch Soul with him to defeat VineMan. He later reappear in episode 9 along with WWW by helping and training GutsMan to have a re-Netbattle against MegaMan.

He appears episode 37 where he forms a quick friendship with GutsMan, Asteroid NapalmMan and TomahawkMan during.

Phantom IceMan transforms into a copy of FireMan upon being encased in ice by the real IceMan. The Phantom Navi is defeated shortly after. Iceman the Strongest

FireMan appears as a boss in Rockman.EXE WS, a alternate telling of the first season of the anime. 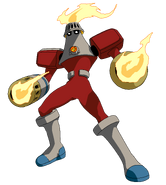