"Perhaps you will be a challenge. Fall to the fist of flame!"
―Torch Man, Mega Man 11

Torch Man (トーチマン, Tōchiman) is a Robot Master who appears in Mega Man 11.[1][2][3] He originally was manufactured by Tsubakuro Precision Machining (ツバクロ製作所, Tsubakuro Precision Machining) as an outdoor advisor that taught campers about fire safety and practiced martial arts to keep the flames coming out from his body under control, but was reprogrammed by Dr. Wily to fight against Mega Man and use his pyrokinetic abilities for destructive purposes. He is a practitioner of Torch-jutsu (トーチ火炎拳, Tōchikaenken, lit. "Torch Flame Fist"), a martial art he developed, being particularly good with jumping kicks. His Special Weapon, Blazing Torch, allows Mega Man to fire a ball of red-hot fire diagonally into the air.

Torch Man is a tall robot master outfitted with red armor covering most of his gray body suit. His shoulder pads resemble torches and are constantly emitting flames, and his feet have vents. Torch Man also has five light blue orbs attached to his armor: four large orbs on the chest plate and one small orb on the helmet. His helmet is cylindrical, with thin vents covering both sides.

Despite being a fire-themed robot, Torch Man is surprisingly cool-headed and disciplined, although he loses his temper when his opponent gains the upper hand in battle, and is quick to activate the Power Gear[2] to give himself an extra edge.

Torch Man spends most of his battle shooting fireballs shaped like fists, occasionally stopping to jump around the room and try to hit Mega Man with a well-placed kick. He can either run up to Mega Man and perform a sweeping kick, or he can jump up and then come down with a blazing drop kick.

When he loses half of his health, Torch Man activates his Power Gear, sets his body ablaze, and jumps around the room while sending giant fireballs rolling on the ground, then jumps into the air and comes crashing down in the middle of the room, creating a massive flame pillar in his wake. He returns to his normal pattern after this.

Cold and wind can douse his flame, which is why he is weak to Tundra Storm.

In the Superhero difficulty, Torch Man's attacks are faster and do more damage, and he pauses for a much shorter time between each attack. He is also able to tap into his Power Gear much earlier in the fight, being able to do so as soon as one third of his health is depleted, as opposed to half in other difficulty modes. 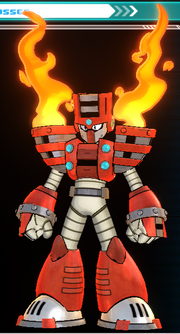 Torch Man was designed as a camping advisor, teaching people about campfire safety. In his spare time, he ventures out into the wild to work on his very own martial art, "Torch-jutsu."

He started Torch-jutsu in order to train himself to keep his flames under control, since the slightest lapse in judgment can cause a dangerous flare-up.

With his training incomplete, he still tends to flare up in moments of strong emotion. He gets particularly excited when it's time for the turkey roast, resulting in many a scorched bird.

He once tried training by standing under a raging waterfall. The subsequent repairs took three months. 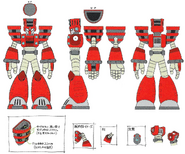 Retrieved from "https://megaman.fandom.com/wiki/Torch_Man?oldid=308083"
Community content is available under CC-BY-SA unless otherwise noted.