In Mega Man X3, its uncharged form is a drill-shaped missile which delays for a moment before firing forward. Several drills can be launched in a spread pattern by tapping the FIRE button rapidly. Tornado Fang can also be used on certain walls to uncover hidden passages. When fully charged, the X-Buster gains a drill tip that will remain until the user releases the FIRE button. If X tries to climb a wall with this weapon charged, the drill will stick into the wall, holding X in place until the player lets go or when all Weapon Energy is depleted.

In Mega Man Xtreme 2, it functions in the same manner as it does in Mega Man X3; however, upon pressing the B Button, three drills will be fired at once instead of a single drill. Unlike in Mega Man X3, these drills will explode as they leave the screen, but it is merely for visual effect. When charged, a gigantic drill appears and stays attached to X's buster for approximately 7 seconds before disappearing. Unlike in Mega Man X3, having this drill attached will not drain any Weapon Energy, but the player will not be able to stay on walls with the Tornado Fang burrowed into it.

In this game, Tornado Fang is the weakness for Neon Tiger, Velguarder, Isaz and Sowilo, Sigma's last form and Wheel Gator. 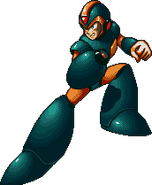 X using a charged Tornado Fang in the manga.
Add a photo to this gallery

Counterpart to this Weapon

Retrieved from "https://megaman.fandom.com/wiki/Tornado_Fang?oldid=301658"
Community content is available under CC-BY-SA unless otherwise noted.