Tornado Man (トルネードマン, Torunēdo Man) is a Robot Master from Mega Man 9 created by Dr. Light. He was created to stave off powerful storms, and his job was stationed at a weather regulation facility. Dr. Light equipped him with powerful equipment, such as the fans attached to his arms, allowing him to stave off tropical storms.

Tornado Man is one of the eight Robot Masters whose period of use had expired and was scheduled to be scrapped. Dr. Wily pretended to be concerned by offering to repair them, reprogramming the tricked robots into becoming his servants who will help him conquer the world.

Tornado Man will often stay airborne while using his Tornado Blow, which consists of four gusts traveling upwards across the screen. During this attack, Mega Man's jump height will be increased. The player should watch out for this, since there are spike traps in the ceiling which Mega Man could bang his head on (and therefore take damage from) while under these conditions.

Tornado Man can be damaged easily by Plug Ball. Even though he stays airborne most of the time this should not be a problem, since he will frequently stay next to the ceiling, allowing his weakness to reach him by running up the walls and along the ceiling. Upon his defeat, Tornado Man surrenders his weapon.

In the end credits picture, he is seen staring off into the sky with Mega Man, having been rebuilt after the events of the game.

Displays the amount of damage in units that Tornado Man will receive from each Special Weapon in Mega Man 9.

Tornado Man's stage is characterized by its large aerial portions, putting Mega Man under the great danger of falling to his death. These sections feature battery-like moving platforms which spin in a circular motion around their own axis, causing Mega Man to spin around them while standing on them. The latter portions of the stage are also affected by heavy storms. As such, the wind will push Mega Man while he's in mid-air. It is recommended to visit this stage after defeating five Robot Masters, as this will allow the player to use the Rush Jet.

Tornado Man appears in the short Mega Man Megamix manga story "For Whose Sake?" included in the booklet of Rockman 9 Arrange Soundtrack.

Like most of the Robot Masters from the classic Mega Man series, Tornado Man made an early appearance in the Archie Mega Man comic in the Worlds Collide crossover event. In an altered reality created by Dr. Wily and Dr. Eggman firing off the Genesis Wave using the power of the Chaos Emeralds, Tornado Man served as part of their Robot Master army. He and his brothers engaged Mega Man, Sonic the Hedgehog, and their allies in battle, with Tornado Man and several other flying Robot Masters ganging up on Tails. All of these Robot Masters were later returned to their proper places in reality by Super Mega Man. 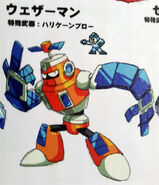 Tornado Man in the ending credits of Mega Man 9.