MMKB
Register
Don't have an account?
Sign In
Advertisement
in: Articles with hAudio microformats, Reploids, Mavericks,
and 7 more

Tornado Tonion, known as Tornado Debonion (トルネード・デボニオン, Torunēdo Debonion) in Japan, is a Maverick from Mega Man X7. He wreaked havoc in the city's Radio Tower, broadcasting silly, annoying messages across the airwaves. Modeled after an onion, Tonion is one of the few Mavericks that is not based off an animal.

Tornado Tonion is a considerably large Reploid with a design loosely based on an onion. He has a green, conical head resembling an onion sprout, and his torso is round and bulbous. The panels on his torso can also be removed to reveal his much more thin and pale interior. His arms are also not connected to his body, instead floating independently near the coils on his shoulders.

Tornado Tonion has an obnoxious and arrogant personality. He enjoyed entertaining others, and was disappointed when Zero found his dance annoying. There seemed to be very little animosity between him and Axl compared to the other members of Red Alert, as they jovially talked about Tonion's silly antics and how Red would probably be annoyed with them. Interestingly, he is one of three members of Red Alert who is fully aware that "the Professor" is manipulating them (the others being Red and Soldier Stonekong) and regretted being used thusly, actually requesting that X kill him in their battle and go on to stop Red Alert. In the English dub of X7, he has a vaguely high pitched German accent and an effeminate voice.

Tonion's attack pattern is changed depending on how much life he has: in the first, he will attack the player with Tornado Dance and Circle, and after taking enough damage, he will switch to using Wiper, Wall and Storm. His protective plates can deflect most attacks, but after absorbing enough damage they will break. However, this is temporary as he can regenerate them quickly. Tonion also lowers or removes his plates to perform his own attacks, leaving himself vulnerable.

Tonion can perform the following attacks:

His weaknesses are the Gaea Shield and Gokumonken. Although the Gaea Shield is fairly easy to use, the amount of damage it inflicts with a single hit is extremely low, making it a very ineffective attack. With practice, using Zero to attack at close-range with his Gokumonken can work out very well. This not only knocks Tonion back, but also inflicts heavy damage on him. The ideal moments to use Gokumonken are when Tonion performs his Tornado Dance and his Wall maneuvers.

Tornado Tonion: You be X, hmm? I ask you favor, yes? Stop us...Stop Red, please, yah?
X: What?!
Tornado Tonion: It professor...professor redesign us... We no longer...
X: Professor?! Who the heck is that?


Tornado Tonion: We no control, yah? Can't stop, none of us. Please, please, save us... We becoming something else!

Tornado Tonion: Gahahahah! Welcome to my silly, silly stage! Here goes nothing, yah! Bo-woing! Gahahahah!
Zero: ...
Tornado Tonion: What? No funny?? But I try so hard, so hard! OK, try again, yah!
Zero: OK, I get the picture. Let's get this over with.

Tornado Tonion: Gahahah! Axl, you grow up handsome boy, yah! But I grow up handsomer boy, a-hah! Bo-woing! Gahahahah!
Axl: Heheh... You haven't changed a bit, buddy!
Tornado Tonion: So, you come up Electric Tower to stop broadcast of my groovy dance, hmm?
Axl: Yup. If Red saw it, he'd get mad and smash the monitor, anyway.

Tornado Tonion appeared in the Rockman X7 4Koma Manga Kingdom shorts. In two of them Zero proves that he is better with jokes, and Tonion asks him to be his teacher. Zero cries after his defeat due to cutting an onion.

Tornado Tonion was one of the many Mavericks revived by Sigma-1 in preparation for his conquest of reality in Worlds Unite. During the attack on the Sky Patrol, he notably crushed the Egg-Wily Uppity Robot Scrambler Cannon, preventing its use against Sigma or the Maverick army. 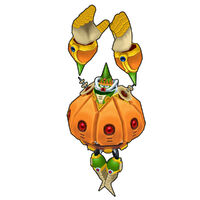 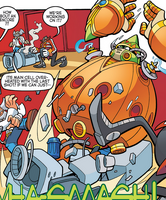