Mega Man 11
Tosanaizer V (トーサナイザーV, Tosanaizer V) is an enemy in Mega Man 11 that appears in Bounce Man's stage, as it was designed to stop people from trying to jump over the pits in Boing-Boing Park. Tosanaizer V's have a purple, round body and black faces, and lack legs due to their ability to fly. If Mega Man gets too close to a pit where a Tosanaizer V is located, it'll emerge from the pit, linger at the top of the screen for a second, and slowly float downwards. To get past a Tosanaizer V, Mega Man can maneuver past it once it starts to descend or just destroy it with his Mega Buster (though a new Tosanaizer V will replace it shortly afterwards). If Mega Man collides with a Tosanaizer V, it'll push him back with its big hands, but the knockback will usually just push Mega Man towards the platform Mega Man started his jump from.

A robot created for the sole purpose of stopping people jumping across pits. Its detachable hands come in sponge and metal varieties. (It always uses the metal ones.) 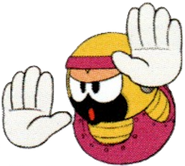