Treble, known as Gospel (ゴスペル, Gosuperu) in Japan, is a wolf-like support robot created by Dr. Wily to work with Bass in a similar way to Rush with Mega Man. Unlike Rush, Treble possesses considerable offensive capabilities to support Bass in battle. Bass can also fuse with Treble to gain wings and fly, as well as to improve his offensive capabilities.

Treble appears as the partner of Bass, who Mega Man meets at the beginning of the game. After Mega Man tells Bass to head to Dr. Light's Laboratory and Bass wrecks the place, Mega Man discovers that Bass and Treble were made by Dr. Wily. The second time Mega Man finds Bass in the Wily Castle, Bass combines with Treble to become Super Bass and face him, but they are defeated.

Treble once more appears with Bass fighting Mega Man at the beginning of the game, being used similar to that of Rush Jet. He appears once more in one of the final stages, the Wily Tower, to combine with Bass and fight Mega Man, and is defeated again.

Treble assists Bass when he is sent by Dr. Wily to stop King, most likely to get his fortress back, after being kicked out by King.

Treble acts a helper for Bass with the Treble Boost once more, along with Treble Rescue. He acts like Rush for Mega Man, assisting Bass.

Treble appears as a support item, where he helps Bass by taking the item dropped by Eddie. Treble shoots from his mouth when Bass attacks with a normal shot, and charges at enemies when Bass fires a charged shot or performs a kick attack. Treble also will jump when Bass jumps, but he doesn't attack during a jump.

Bass uses Treble as a car (or a vehicle resembling Treble) in the Battle & Chase. Treble also appears in Bass's ending, where he is used to communicate with Dr. Wily.

Treble once again assists Bass, this time against the Dimensions.

Treble fights alongside Bass as a boss in the "Room of Building Blocks". The pair are accompanied by Pharaoh Man and Knight Man.

Treble seems to be an amalgamation of sorts of all of Mega Man's support characters, though many of his functions are imitations of Rush's.

Treble can fly to transport Bass like the Rush Jet. This function was only used in the opening animation of Mega Man 8. Appearances:

The Super Adapter allows Treble to merge with Bass, acting like an armor that increases his strength and gives him the ability to fly and perform a flying fist attack. Unlike Mega Man's Super Adapter, Bass has the ability to fire either a regular charged shot or a rocket punch, as opposed to just the rocket punch. It was created by Dr. Wily using the parts Bass had stolen in Dr. Light's lab in Mega Man 7, which were originally planned to enhance Rush's Super Adapter. Bass used this in the second battle against Mega Man in the Wily Castle.

The appearance and abilities from Super Bass changed in later games.

In Mega Man 2: The Power Fighters, Treble appears to assist Bass for a limited time when he takes the Support Item dropped by Eddie. Treble shoots from his mouth when Bass attacks with a normal shot, and dashes at enemies at high speed when Bass fires a charge shot or performs a somersault kick. Treble also jumps when Bass does so, but he doesn't attack during the jump.

Treble Item is an item that Bass can buy for 20 Screws in Reggae's shop. When used, Treble appears and gives a random item to Bass, similar to Mega Man's Eddie Call.

Treble Rescue is an item that Bass can buy for 30 Screws in Mega Man 10. It acts similar to the Beat Call, saving Bass from bottomless pits by using the Treble Boost for a few seconds.

In Bass' ending from the Japanese version of Mega Man: Battle & Chase, Wily contacts Bass. During the conversation, Bass orders Treble to cut the communication when he got angry with Wily, suggesting Treble is the source of the communication. As only their voices are heard, it's unknown if Treble can only reproduce the voices or is able to show images like the Rush Vision.

Treble has appeared in several Archie Comics issues, notably from the Mega Man and Sonic the Hedgehog based series during the Worlds Collide crossover. His Archie debut actually took place in Sonic the Hedgehog Issue 250, though he also appeared in Mega Man Issue 27, Sonic Universe Issue 54, and Sonic the Hedgehog Issue 251. His first appearance featured him getting annoyed with Dr. Eggman's robotic lackeys, Orbot and Cubot, while the latter three featured him joining Bass and Metal Sonic in battling Mega Man and Sonic. Despite proving a formidable opponent, he and his two teammates were defeated and then enveloped by the Super Genesis Wave. At the end of the battle with Mega Man and Sonic, Mega Man noted that Treble and Bass were too badly damaged to join together, a nod to the existence of Treble's Super Adapter function. Treble and Bass were subsequently restored to their proper place in reality by Super Mega Man.

Treble has also appeared in the series' Short Circuits humor strips, first appearing in Issue 4 alongside Bass, Proto Man, and Rush, all of them hoping to be included in the comic. Though not physically present, he was also mentioned in one of the "Off Panel" strip from Sonic Universe Issue 54 where Bass and Metal Sonic's rock duo prompted Mega Man to note that he had expected Bass to merge with Metal Sonic like he did with Treble. This was, in fact, a nod to an abandoned concept from the crossover.

Treble, alongside Bass, teleported in just as Mega Man descended from a spike-filled vertical tunnel, with the 30th Icon containing the key art and footage for Mega Man 7 being at their feet. Despite their rivalry with Mega Man, they do not attack him. It should be noted that, unlike most of the other characters and the overall setting of the trailer, they do not appear in their 8-bit sprites. Instead, they use the sprites from Mega Man 7, their debut game. 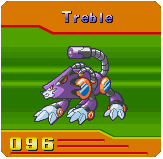 Concept art of a back side view of Treble.

Treble, as he appears in Mega Man 7.

Treble, as he appears in Mega Man 8. 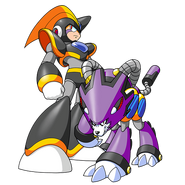 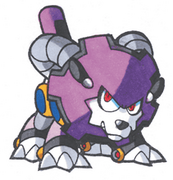 Treble in the manga Rockman & Forte.

Bass and Treble in the manga Rockman & Forte.

Bass and Treble in the manga Rockman 10 -Extra F-.

A trophy of Treble alongside Bass in Super Smash Bros. for Wii U