"Your neck is so tiny... I'll snap it with one chomp! Grrrrrrr!"
—Tretista Kelverian, Mega Man Zero 3

Tretista Kelverian (トレテスタ・ケルベリアン, Toretesuta Keruberian) is one of the bosses in Mega Man Zero 3. Tretista is a Mutos Reploid based on Cerberus, the three headed hellhound. He is the Dark Judge (冥闇審官, Meian Shinkan)[1][2] from the Eight Gentle Judges, and has three independent thought circuits that he uses to reach a fair judgement as a Chief Judge.[3] These circuits act as the voices of compassion, aggression, and reason. When Dr. Weil brainwashed him to be one of the Weil Numbers, he could not think properly. Instead, his aggressive traits were amplified, furthering his beast-like nature, and he became violent and arrogant. When Zero went to investigate a giant elevator created by Neo Arcadia, he finds Kelverian protecting it, fighting him. Zero then discovers the elevator is used to transport mass amounts of E-Crystals to be used as energy. As with the other Judges, Kelverian reappears in the final stage, but is defeated again by Zero.

Tretista attacks by separating the dogs attached to his shoulders, which then jump around the room, throwing a box and then dashing to destroy it, spitting vaporous energy balls across the floor, and bending a metal bar into a V shape and then tossing it like a boomerang. At A or S rank he will use his EX attack, where a large laser occasionally comes from his claw when he dashes to the box. Although not a weakness, Burst Shot is effective against him, as it can hit him multiple times.

Defeating him gives Zero the Absorber Body Chip and, if at A or S rank, the Gale Attack EX Skill. 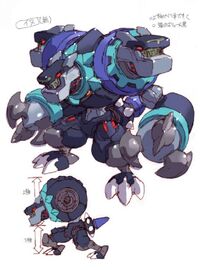