Triad Thunder (トライアードサンダー, Toraiādo Sandā) is the Special Weapon that X obtains from defeating Volt Catfish in Mega Man X3. In its uncharged state, the weapon causes three orbs to surround X, in an upwards triangular pattern, which conduct electricity between them to form a triangle, and then fire a trio of electric blasts outward before falling down off the screen. If the FIRE button is pressed when the orbs appear, the pods will then change formation to an upside-down triangular fashion for an additional use of the same amount of Weapon Energy used to fire the weapon in the first place. The player can change the pods back to their original position, and can even change it up to three times unless either the weapon runs its course, an enemy makes contact with any of the pods, or the player runs out of Weapon Energy.

When fully charged, X smashes his fist against the ground, releasing electric sparks along the floor and walls. Any enemies touching the ground during this attack will be destroyed or heavily damaged. This can also be used to destroy some obstacles and open new paths, like the ropes holding rocks in Tunnel Rhino's stage.

Crush Crawfish, Bit and Volt Kurageil share a weakness to this weapon. 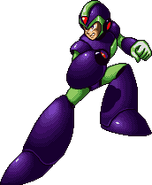