After Omega-Xis swallows the OOPArt matching the version of the game, Geo Stelar later gains an Ability Wave that allows him to start battles as his version's Tribe. Otherwise, while he is not using any Tribe, he has the option to Tribe On to the Tribe of the version being played using a Brother Card, regardless of the version that Brother is playing.

Alternatively, a Wave Command Code can be entered to start battles as any Tribe. However, this will be overwritten by any Tribe's Ability Wave that is equipped, and the Wave Command will only last until the game is restarted.

While using Tribe On, Tribes from Brothers who are playing the same version cannot be invoked. However, invoking a Tribe from a Brother playing a different version will combine both Tribes to form a Double Tribe.

Double Tribes retain the card charge ability of the former Tribe, combine the innate abilities from both Tribes, and have their element and Charge Shot matching the latter Tribe. Each Double Tribe has its own Link Force Big Bang, which depends on the combination of elements involved with the Double Tribe. Getting hit by the Double Tribe's weakness will result in the entire Double Tribe being canceled.

Mega Man Rogue, known as Rockman Burai (ロックマンブライ, Rockman Burai) in Japan, is a form that can only be obtained by the player inserting all six Indie Fragments into their real-life Brother slots. This means that Brothers must be deleted to use it. Mega Man Rogue has no weakness, meaning the player will not lose it once used. To invoke a Mega Man Rogue form, the player must use the only Brother card that they have while having all six Indie Fragments equipped - Mega Man will transform into the Rogue version of the games version's Tribe.

Countering whilst in a Rogue Tribe will not net the player any LFB. Instead, to invoke the LFB players need to tap their only Brother card (the one used to invoke the Rogue Tribe in the first place) in response to the opponent using a dimming chip in a versus battle. After which, the Tribe will expire. The LFB is the same as the games version's Tribe's LFB.

Whilst using any Rogue Tribe On, players cannot use any Mega Cards. Also, instead of the element boost Mega Man would gain with a normal Tribe, all of his Sword type Battle Cards will gain +50 attack. Mega Man will also gain a 1HP EM Barrier (電波しょうへき Radio Wave Barrier) that will regenerate every turn. Mega Man's Charge Shot and other abilities are otherwise the same as the games version's Tribe. In multiplayer battles, if the opponent attempts to lock-on for too long, the cursor will break for a period of time.

Alternatively, players can use the Rogue Tribe through use of a Wave Command code. If the Rogue data is turned on, Mega Man will start the battle as his Rogue Tribe form if the Tribe Ability Wave is equipped. Players will not need to delete their Brothers, but they will not gain any Link Power from them, and cannot use their Brother cards.

In Ryuusei no Rockman Tribe, Warrock eats and swallows the OOPart Berserk, called Sword of Berserk in the anime, like the game. Early on, when the Berserk power arises from Rockman, he's given incredible strength but goes completely wild. After Subaru undergoes a trial in his conscious, he at last gains control.

While the anime's intro and promo art shows Green Shinobi and Fire Dinosaur, they aren't used by Rockman in the show. At least, until the final episode, where Rockman goes through each of the three Tribe Ons for split seconds and combine their powers into Tribe King.

Before deciding on using the Noise Change system in Mega Man Star Force 3, Tribe On was considered to return in the game, two other Tribe forms dubbed "Pirate Mega Man" (パイレーツロックマン) and "Angelus Mega Man" (アンジェラスロックマン) being created in the process.[1] 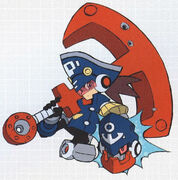