Christmas is coming to Densan City very soon though this does not stop the Cyber Beasts from continuing to send their Zoanoroids to capture Trill. Meanwhile, its almost closing time at MaHa Ichiban but while outside, Dekao saw Iris running away from an unknown assailant.

The next day, Zoano SnakeMan of Falzer attacks the cyberworld of the NetPolice Headquarters as sources indicates that Trill is hidden there. The presence of a strong firewall surrounding the area further support this. Enzan and Blues are the first to arrive the scene and engage Zoano SnakeMan in combat but even he is no match against a Zoanoroid in his Beast form alone. Luckily, help arrives in the form of TomahawkMan and GutsMan. After having his arm chopped off by Blues, Zoano SnakeMan was forced to retreat, swearing revenge against his opponents. With the threat removed, the heroes are finally allowed to rest. Dr. Hikari reveals that several days ago he spread news of Trill being secured in the NetPolice HQ and Zoanoroids have been invading ever since. In reality, Trill is safe with Rockman at a firewall laboratory. However, the real goal of this was to lure the mysterious blue female Navi that has connection with the Synchronizer out of hiding and capture her.

Needing more help to protect Trill, Raika is called back to Nihon. Arriving at the NetPolice HQ, he is greeted by his friends and was further updated with his mission. Raika notice that Netto is absent and ask about his whereabouts. Netto suddenly appear in the monitor to inform Raika that he is with Rockman and Trill and sign off after telling his friends good luck with the mission. The plan eventually works and Iris' Navi had reached where Trill supposingly is and easily bypass the firewall. At the same time, another Zoanoroid has arrived to the site and Raika, Enzan, Dekao and Dingo send their Navi to the Cyberworld to combat it. Much to their surprise (especially GutsMan and Dekao), the Zoanoroid leading Mini Dream Virus army is Zoano GutsMan who unlike his counterpart, isn't surprise to see a look alike of him. As if the Mini Dream Viruses are not hard to defeat, Zoano GutsMan proved himself to be better than his Beyondard counterpart, not only beating him in strength but also being able to dodge SearchMan's attack. Seeing that the heroes have no intention of surrendering Trill to him, Zoano GutsMan plugged out and enters the real world via a Copyroid that was send to the building by a truck. Raika volunteers to fight the newly materialized Zoanoroid in his Beast Form and Cross Fuse with SearchMan.

Meanwhile, Iris' Navi have reach to where Trill is but find out that it is only an Kawarimi Doll of him. Roll was there too and inform her that she had fell for their trap. Despite this, Iris' Navi is able to escape from Roll and go through the firewall where the heroes have already defeat the remaining viruses and Zoano GutsMan have retreated back into the Cyberworld. Suddenly, an invisible voice inform Zoano GutsMan that Rockman is absent the entire time meaning that Trill isn't here either. GutsMan foolishly spill out what their plan is and the importance of Iris' Navi. Upon realizing this, the invisible being shot Iris' Navi with a beam but she came out unharm and successfully escaped. The Zoanoroids too escaped shortly after this. Unknown to both sides, the entire scene is being watched by a Beast Form Nightmare virus.

While the NetSaviors discuss their next action to capture Iris' Navi, Meiru and the others watch as the first snow fall from the sky, signaling Christmas is approaching very soon. When Dekao mention of seeing Iris, Enzan ask him where he last saw her. As expected, Enzan found Iris near MaHa Ichiban but she easily run away from him, knocking out Dekao and read his mind along the way. Now knowing where Trill is, Iris make her way to the firewall laboratory but Enzan had anticipate her arrival and had Superintendent Manabe place several guards around the perimeter to capture her. Now in the NetSaviors' custody, Iris explains that she needed Trill to end the war back at her world. Suddenly, the alarm was raised and a huge army of virus led by Zoano GutsMan is standing outside where Trill and Rockman are located. The invisible being reveals himself as Zoano DarkMan and explains that the beam he shot Iris' Navi with was actually a tracking beam which help them locate where Trill is. As the forces of Glaga begin to attack, Zoano SnakeMan too had arrived with his own army, revealing that he followed Glaga forces using the Nightmare virus. The episode ends with the firewall surrounding the castle where Trill is begin to break from the combine force of two Zoanoroid armies.

In order of appearance:

This episode was released on the 4th volume of the anime in Japan on DVD. 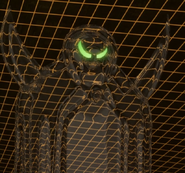 Zoano GutsMan with an army of Dream Viruses outside the location of Synchronizer.

Zoano SnakeMan with an army of RoiHawks.
Community content is available under CC-BY-SA unless otherwise noted.
Advertisement