Triple Blade (トリプルブレイド, Toripuru Bureido) is Blade Man's special weapon in Mega Man 10. When equipped, the player fires three blades that move in three different directions, being able to attack multiple enemies at one time. There are two patterns: surface-to-air on the ground, and air-to-surface in mid-jump. It can sometimes destroy Shield Attackers from the front.

Triple Blade is Strike Man's primary weakness - not only can this weapon destroy his Rebound Strikers, but each blade can damage him separately, making very short work of him. 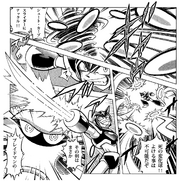