Triple Rod (トリプルロッド, Toripuru Roddo) is a lance-like weapon in the first Mega Man Zero game. If Zero completes the "Retrieve Data" mission (where he fights Maha Ganeshariff in the Forgotten Laboratory), Cerveau will analyze the data and create the weapon to Zero, giving it to him when Zero talks with him in the Resistance Base. It is a modification of the Z-Saber which allows its hilt to be extended up to three times for additional range and has a spear-like energy tip at the top; however, the extension can only be executed if standing still on the ground. It can also be used to attack in eight directions (left, right, up, down, upper left, upper right, lower left and lower right). It can be charged and equipped with element chips. When fully charged, Zero will swing the rod around himself like a battle staff, with an energy tip on both ends; when in mid-air, Zero spins the Triple Rod in front of him.

Obtaining the Triple Rod is entirely optional, it can be skipped to complete the game. The Triple Rod is destroyed in the time gap between the first and second game, and the Chain Rod is constructed as a replacement. 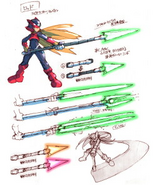 Concept art
Add a photo to this gallery
Retrieved from "https://megaman.fandom.com/wiki/Triple_Rod?oldid=279495"
Community content is available under CC-BY-SA unless otherwise noted.