Rockman.EXE Legend of Network
Trojan Horse (トロイノモクバ, Toroi no Mokuba) is the final boss of the game Rockman.EXE Legend of Network. It is a Trojan horse created by Dr. Troy 3000 years before the game, in the Atlampian Civilization. Nobody revived the Trojan Horse and attempted to use it to destroy the modern world, but it is stopped by Lan and MegaMan.

A manifestation of the Trojan Horse was also installed in RideMan.EXE and the Trans Arm system.

Note: The names of these attacks are not official. 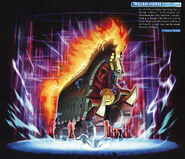 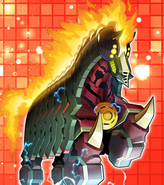