Tron Bonne (トロン・ボーン, Toron Bōn) is a character from the Mega Man Legends series. Tron is the only daughter of the Bonne family of air pirates, being like an anti-heroine, and is the star of her own game, The Misadventures of Tron Bonne.

She is 14 years old, 155 cm (5'1") tall, and weighs 43 kg (95 lbs).[1] She is a genius mechanic that handles the design and construction of the Bonne's machines, including their airship, the Gesellschaft. She is also an able pilot, usually the one piloting fighting machines like the Gustaff, Feldynaught, and Jagd Krabbe.

Tron created the 40 Servbots that assist the Bonne family in various tasks, like helping Tron build and maintain her machines. She can be very harsh with the Servbots, sometimes even punishing them in a painful way, but despite this, Tron is usually tender and affectionate towards them, like a mother.

She usually wears a pink t-shirt with the Bonne family mark, a small blue jacket, black trousers, pink gloves, pink heeled shoes, two Bonne earrings and a headband. Additionally, a grey steel plate is in the crotch region of her trousers.

Tron is stubborn, feisty, self-confident and determined, mocking her opponents openly whether she's winning or not. She is very temperamental, as during some moments she is calm and happy, and during others she can explode into a rage and yell without any warning. Tron appears to have a small fear of dogs. Throughout the series, she begins to develop a crush on Mega Man Volnutt. Because of her inexperience in the ways of love, she doesn't understand her feelings towards him, and even through they are enemies, she has gone to great lengths to try convincing him to join her. Due to this, she has a rivalry of sorts with Roll Caskett as a fellow genius mechanic and as Mega Man's love interest.[2]

Tron has always wanted to go on missions with her older brother Teisel Bonne, but even through Bon Bonne and the Servbots participates on them, Teisel has always held her back to protect her. Unknown to Tron and the others, Teisel loaned one million Zenny from Lex Loath to be able to finance the construction of their airship, the Gesellschaft. When the airship was almost complete, he went with Bon Bonne to the Nakkai Ruins in Ryship Island to find a Refractor to pay his debt, but one of Loath's men, Glyde, captures him and Bon saying that the payback time is long over and now he has to work for it. The Gesellschaft loses contact with Teisel, and worried with him, Tron goes to his last location with a Drache, finding the Gustaff broken and the Servbots that were with him scared and crying. The Servbots tell her what happened, and they return to the Gesellschaft, where they find Teisel's IOU receipt. Tron is shocked by how much money he owns, but she is determined to obtain money to pay the debt and rescue her siblings.

Tron and the Servbots begin to steal valuables from the island, the player being able to choose which area to go, varying from going in digouts in the Nakkai and Shala-Kun Ruins, steal containers from harbors, and steal animals from the Sart Farm. When they attack Gold City, they must face the police, including Denise, who gives her best to stop Tron, but doesn't has luck and is scolded by her captain. Tron shows some sympathy towards Denise's misfortune. After obtaining the needed money, they go after Loath and pay the debt to free her brothers, but Loath says it is not enough as they must also pay the interest on it, saying they still own two million zenny and taking them out of his hideout. They continue stealing the island until the new amount of money is obtained, and search for Loath to pay the debt, Servbot #15 finding him in a warehouse from Primiki Harbor. However, Loath says they are still short, as Tron has interest on her interest, and he captures her to help Teisel the debt by working with him.

Inside Loath's dungeon, Tron finds her brothers, Teisel telling her Loath's plan to make people work for him to find the Colossus. She contacts the Gesellschaft and orders the Servbots to rescue them, but instead of running, they decide to steal what Loath found. When they find the Colossus, Glyde appears and fights against the Gustaff, Tron saying she pilots. After Glyde's defeat, Loath activates the Colossus and the Bonnes escape from the collapsing dungeon, returning to the Gesellschaft. They try to face the Colossus, but the Gesellschaft's weapons are ineffective against it and Tron is injured by its attacks, passing out. After the Servbots defeat the Colossus, Tron is shown to be better and prizes them. Teisel notices how much Tron had grown, wondering how he would explain himself to their departed mother if she saw Tron running around shooting at everything, but he says she did good and is proud of her. Using a Drache, Tron reluctantly rescues Loath and Glyde from the water and tie them, secretly sending them to Denise to help her keep the job, saying to Teisel she only wants to make sure Loath will not cause trouble again. When the Bonnes are commemorating in the Gesellschaft, Tron discovers the favorite Servbot had thrown away the Colossus' golden Refractor by accident, and she gets furious, saying she has something really special waiting for him in the Torture Room.

Tron is an antagonist in the game, as she is a member of the Bonne family of pirates and attack Kattelox Island. Mega Man Volnutt sees her for the first time talking with Servbots and walking around the city. Jim and his friends suspect she is a pirate and send the dog Paprika after her, Tron running away in panic and climbing a street light to escape. Mega Man saves her by making Paprika go away, and Tron, embarrassed, tells him to mind his own business and ran away, developing a crush on him. When they meet again, Tron is piloting the Feldynaught and fights against Mega Man, but is defeated. She later appears again with her family on the Gesellschaft and piloting the Balkon Gerät, Focke-Wulf, and Bruno, felling strange when close to Mega Man. When Mega Man is trapped by MegaMan Juno in the Main Gate, Tron and Teisel free him and they find the large Refractor that is inside. As the Gesellschaft and the Bonne's other machines were destroyed, they use a boat made of scrap to leave the island, Tron hoping it won't sink until they reach the next island.

With the Refractor found in Kattelox Island, the Bonne family opened a department store, but Teisel expend most of their money and have financial problems, needing to return to piracy. One year after the first game, Verner Von Bluecher goes after the Mother Lode with his giant airship, the Sulphur-Bottom, and the Bonnes make an alliance with Glyde, Bola and Klaymoor to take the Mother Lode for them, Tron and Teisel entering the airship disguised as reporters. When Gatz damaged the airship, they are stuck in Forbidden Island's storm until Mega Man stops it by freeing Sera, and they discover about the four keys needed to obtain the Mother Lode.

When searching for the keys, Mega Man faces Tron piloting the Jagd Krabbe in Manda Island, were she jams Roll Caskett's transmission and uses a voice modifier to make him think Roll is a bad person. After her defeat, she leaves with a Drache, being sad and jealous of Roll, getting depressed for some time. In the Saul Kada Ruins, Tron (piloting the Hover Gustaff) and Bon agree to make a truce with Mega Man to stop the lava flow and be able to defeat Wojigairon, leaving it to Mega Man while they go after the key. When they meet again, Tron fights against Mega Man with the help of Servbots #11 and #23. When defeated, she loses her clothes in Gustaff's explosion and Mega Man sees her naked (off-screen). Tron is very embarrassed and retreats, becoming depressed again for a while, and when the Servbots talk about the mission in the ruins, her face goes all red and she gets upset with them, #11 and #23 being the only ones to known what happened. In a last attempt to obtain one of the keys, the Bonnes and Glyde work together to attack Calinca with the Gemeinschaft, but they are defeated by Mega Man again.

When Sera stole the four keys and Geetz attacks the Sulphur-Bottom, the Bonnes help Mega Man with a Drache to be able to obtain the keys, and the Drache is taken down by Geetz. In the end, Mega Man is stuck in Elysium, and Tron probably reforms teams up with Roll to build a rocket to rescue him and refusing to accept Data's help.

Tron was to appear in the now-canceled Mega Man Legends 3. It's only known that the Bonnes had a takoyaki stand in Klickelan Island and they piloted the Donner Wels.

Tron Bonne is a playable character in the fighting games Marvel vs. Capcom 2: New Age of Heroes and Marvel vs. Capcom 3. In those games she pilots a green Gustaff and has a Servbot accompanying her. Her attacks include Gustaff Fire, Bonne Strike, Bonne Mixer, King Servbot, and Lunch Rush.

When not playing as her, she can be see along with Teisel, Bon and the Servbots in the background of the Kattelox Island stage in Marvel vs. Capcom 3. Interestingly, Teisel will cheer on Tron, when the player is using the latter. If Tron is defeated, Teisel becomes sad and sits down. This situation is similar to how Sally (Sari) cheers for her husband, Street Fighter character Dhalsim.

In Tron Bonne's ending in Marvel vs. Capcom 3, Tron reprograms a Sentinel to become Servbot #42. She then tries to convince Mega Man Volnutt to go out with her, threatening to order #42 to attack should Volnutt say no.

In the Distant Future, Tron and Servbots #1, #17 and #28 are being followed by the United Galaxy Space Force members Hiromi Tengenji (from Burning Force) and Toby Masuyo (from Baraduke) in the ruins of a distant planet, when suddenly the fluxes makes them appear in an unknown place (Spiritual World) with other characters and are attacked by Reaverbots and Octys. They make an alliance until they find a way back home. They are lost in the Spiritual World, but managed to find the Gesellschaft there by following the energy signature of the Refractor in its engine, which is also detected by the player's characters and they join the team in Chapter 11.

Tron and the Servbots were working on a rocket when they are suddenly sent to a mall with zombies, teaming up with Frank West (from Dead Rising) and Hsien-Ko (from Darkstalkers) to survive. They are found by the player's party and joins them. 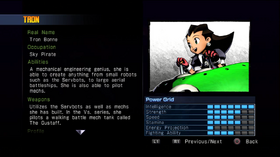 Tron disguised as a reporter in Mega Man Legends 2.

Art of Tron by Hideki Ishikawa.

Tron in Marvel vs. Capcom 2: New Age of Heroes.

Tron in the versus screen from Marvel vs. Capcom 2.

Tron in Marvel vs. Capcom 3: Fate of Two Worlds.

Tron in Ultimate Marvel vs. Capcom 3: Fate of Two Worlds.

Tron as she appears in Project × Zone.

Tron Bonne in Marvel vs. Capcom Series
Add a photo to this gallery

Retrieved from "https://megaman.fandom.com/wiki/Tron_Bonne?oldid=198475"
Community content is available under CC-BY-SA unless otherwise noted.