Truck Joe (トラックジョー, Torakku Jō) is a Sniper Joe driving a big spike-fronted truck, making their debut in Mega Man 7. They appear twice as the sub-boss of Turbo Man's stage in Mega Man 7, one of them appearing near the beginning. If Mega Man uses his Noise Crush, they will pause to cover their ears. If the player can get Mega Man behind the truck, the Truck Joe will put the truck into reverse gear and back up the vehicle with one hand on the seat as they look back, similar to a human doing the same. This makes Truck Joe one of the most expressive generic enemy units in Mega Man 7. Truck Joes' personalities, like their driving, can be a bit rough, but actually they are not such bad guys.[1]

Truck Joe (or perhaps "Track Joe" since the two are pronounced the same in Japanese and he isn't driving a truck), shortened as Joe in-game, appears in Mega Man: Battle & Chase as one of the extra opponent racers, the others being 4 Roader and Yellow Devil. This Joe just got his driving license, but he has the neck to try the Battle & Chase competition. His car is able to drop mines.

"I'll show you what real driving is all about!"
—Black Joe

Black Joe (ブラックジョー, Burakku Jō) is a secret opponent from Mega Man: Battle & Chase, a black colored Joe with improved driving skills. He is the first member from the Black Troop to challenge the player.

Displays the approximate amount of damage in units that Truck Joe will receive from each Special Weapon in Mega Man 7.

*For Mega Buster, Wild Coil and Noise Crush, the first number is the damage done when the weapon is fired normally; the second number is damage done when the weapon is charged up.
*For Freeze Cracker, the first number is when the shot is whole; the second number is after it splits
*For Junk Shield and Super Adaptor, the boss lacks invincibility frames, so each shot will hit several times.
*For Slash Claw, the damage dealt depends on how much of the attack hits the boss. It will deal more damage if more of the attack makes contact

Truck Joe had a brief appearance in the Rockman 7 manga. 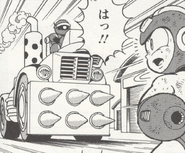 Truck Joe in the Rockman 7 manga