Tundra Man (ツンドラマン, Tsundora Man) is a Robot Master who appears in Mega Man 11. He was originally created by Dr. Cossack as a surveillance robot designed to monitor environment changes in some of Earth's coldest regions. He led a lonely life, though, and after watching an ice skating championship on TV, he was inspired to become a professional figure skater. While under maintenance in Dr. Light's laboratory, he was stolen and outfitted with a Speed Gear by Dr. Wily, along with some other modifications, so he could be better suited for combat, after which he took over a museum.

His Special Weapon, Tundra Storm, allows Mega Man to generate a column of icy cold air that can destroy enemies directly above and below him.

Tundra Man is a tall, slender Robot Master. Most of his body is covered in bluish-purple armor, parts of which have ice crystals embedded in them. He also has ice skate blades on his feet and a long ponytail made of ice crystals.

According to the Mega Man 11 Gallery database, Tundra Man originally had a tougher-looking exterior before he modified himself to be better suited for skating, but it's unknown what this original form of his looked like.

Being an ice skating robot, Tundra Man is very flashy and likes to show off his moves; he constantly dances even while he's fighting. Like most of the other Robot Masters in Mega Man 11, Tundra Man also enjoys making puns based off of his elemental powers.

After half of his health has been depleted, Tundra Man will activate his Speed Gear. He will rapidly skate across the room three times, before jumping and performing Tundra Storm in the middle of the screen. This can be avoided by jumping over him and sliding away before he performs Tundra Storm. After this, he will return back to his standard pattern, but he can activate Speed Gear more than once.

In the Superhero difficulty, Tundra Man is faster, and can activate his Speed Gear earlier. 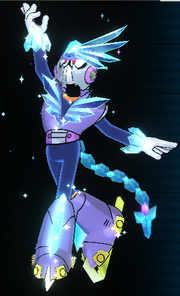 Though Tundra Man was designed for land development and exploration in polar climates, he found a new obsession the first time he saw a TV ice-skating championship.

Since then, he has spent long years perfecting incredible ice-skating techniques out on the polar ice flats. But since his audience is generally huskies, polar bears, and seals, he doesn't get many reviews.

Tundra Man had a tougher-looking exterior when he was first sent to the North Pole, but he made some modifications to suit his graceful passion of ice-skating.

To him, the fact that his dazzling moves have been locked away at the North Pole and never witnessed is a crisis on the scale of global warming. Tundra Man eagerly awaits the day when he can show the world his exquisite skills.

Retrieved from "https://megaman.fandom.com/wiki/Tundra_Man?oldid=274340"
Community content is available under CC-BY-SA unless otherwise noted.