"Create a sub-zero blizzard around yourself, damaging any enemies inside. Try it with the Power Gear active for a massive blizzard that covers the screen!"
—Mega Man 11 description (Mega Man)

Tundra Storm (ツンドラストーム, Tsundora Sutōmu) is Tundra Man's Special Weapon in Mega Man 11. With this weapon, Mega Man is able to damage any enemies directly above and below him by shooting out a large column of snow and cold air. Larger enemies are frozen solid by this attack, and smaller ones are destroyed instantly.

Using this weapon with the Power Gear turns it into a full-screen attack, emitting an icy blast that damages everything onscreen.

If used in the air, Mega Man will hover for a brief second.

As with all of the Mega Man 11 Special Weapons, Tundra Storm gives Mega Man new Head Gear and Arm Gear that alters his physical appearance when equipped, rather than simply swapping his colors. The Head Gear is a deep blue helmet with ice crystals that slightly resembles Tundra Man's, and the Arm Gear is a larger buster made to look like a freeze ray.

This weapon is the weakness of Torch Man. 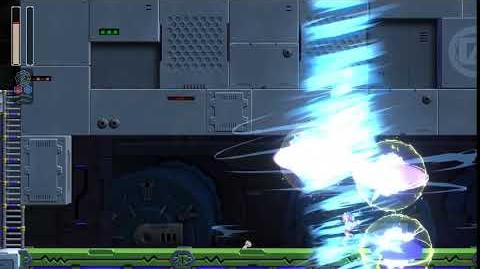 Tundra Storm
Add a photo to this gallery

Retrieved from "https://megaman.fandom.com/wiki/Tundra_Storm?oldid=300257"
Community content is available under CC-BY-SA unless otherwise noted.