MMKB
Register
Don't have an account?
Sign In
Advertisement
in: Articles with hAudio microformats, Reploids, Mavericks,
and 12 more

Tunnel Rhino, known as Screw Masaider (スクリュー・マサイダー, Screw Masaider) in Japan, is a Rhinoceros-based Reploid from Mega Man X3. Formerly he worked as a miner in an Energen Crystal mine, but upon going to Dopple Town by invitation he became a Maverick. Now under Doppler's orders, he occupies a rock quarry and uses his drilling weapon, Tornado Fang, for destructive purposes.

Tunnel Rhino's main weakness is Acid Burst, but it takes practice to wield properly and Rhino is invincible while he flashes. Zero, in Mega Man Xtreme 2, can easily take him on with Earth Gaizer.

In Rockman X3 manga, Tunnel Rhino confronted X, Zero, and Dr. Cain when they visited a construction site, but he was easily defeated by the duo. Dr. Doppler then appeared and attempted to power up Tunnel Rhino by encasing him in a viral cocoon, but X and Zero manage to defeat him, reverting him to his original state and left unconscious. He was later hired as a Maverick Hunter, and alongside Blast Hornet, Neon Tiger, and Blizzard Buffalo, assisted X and Zero in their battle against Bit and Byte.

Tunnel Rhino is one of the many Mavericks of the X series who appeared in Worlds Unite, having been cloned by Sigma. He and his comrades attacked the Sky Patrol, with Tunnel Rhino engaging Big the Cat, before departing to plant Unity Engines on other worlds by traveling through Genesis Portals. 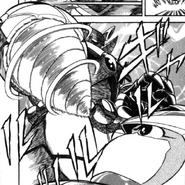 Tunnel Rhino in the Archie Comics.