Turbo Man (ターボマン, Tāboman) is a Robot Master created by Dr. Wily in Mega Man 7. As Wily had run out of materials to create a new robot, he modified one of his old cars into a combat robot.

Turbo Man has the ability to transform into a car form called Crash Drive (クラッシュドライブ, Kurasshu Doraibu), but the transformation system is incomplete, and ultrasonic waves like Shade Man's Noise Crush can damage him. However, he becomes an invincible electrified car for a short time if charged with high voltage electricity such as Cloud Man's Thunder Bolt, being able to attack in his car form multiple times in succession. His Special Weapon is Scorch Wheel, a concentrated wheel of gasoline set on fire formed akin to shield-type weapons that rolls along the ground. When obtained by Mega Man, it can also be used to illuminate dark areas.

Turbo Man and Quick Man are rivals, and in Quick Man's ending of Mega Man Battle & Chase, Quick Man enters the Battle & Chase competition to challenge Turbo Man in a race, but Turbo Man could not enter the competition due to a problem. In the Japanese version, Turbo Man says he saw the race on TV and calls Quick Man for a race in the G-1 Circuit, where they can run at top speed.

Despite being a robot, Turbo Man is quick on his feet. He uses gasoline as his primary energy source, although since he also uses it for his attacks, he is not energy-efficient and gets poor mileage. Turbo Man's hobby is to drive around at high speeds on straight stretches of road with the stereo that was part of the car used to create him at the maximum volume.[1] Due to his more streamlined build, Turbo Man has a strong dislike for rough and bumpy roads and off-road driving. He also dislikes Burst Man (whose soap-like weapons can cause Turbo Man to skid uncontrollably) and Punk (whose blades and spikes can flatten his tires).

First, Turbo Man will use his Scorch Wheel, jump to the ceiling and fire it at Mega Man in midair, then making it split into four fireballs that make fire pillars when they make contact with the floor, aiming to hit Mega Man. It is very dangerous if the player gets hit, as the fire that makes up the Scorch Wheel is a special fire that not only damages Mega Man, but traps him in flames and every half second consumes a unit of health from Mega Man. It can be avoided by jumping from the edges of his lair (depending where Mega Man is), making him fire it to the wall and missing Mega Man (however, it may be necessary to slide if necessary to avoid it), then sliding towards Turbo Man and then to the opposite side to make the fire pillars fall and miss Mega Man. Then he will start up his engine, either trying to suck Mega Man into the fire pillars, or just into him. This is avoided by standing on the edge of his lair and sliding to avoid being hit by him or by just shooting a charged shot from the Mega Buster, which will make him flinch and stop sucking Mega Man towards him then hopping to where he was. Then he will transform into the Crash Drive and drive back and forth across the room several times, being invincible while driving. He makes a screeching noise, turns his motor on and drives towards Mega Man. It is avoided by jumping after he turns on his motor.

His weakness is the Noise Crush, and it prevents him from using his Scorch Wheel, making him go directly to the phase of driving towards Mega Man, although he will do it once. It defeats him in ten uncharged shots and five charged ones. He is also immune to the Thunder Bolt which super charges him and makes him invincible, and makes him Crash Drive three times before returning to normal.

The player can also use the Super Adapter against him. Not only will it hit him with the rocket punch (if earned in his stage by using Rush Search on the first traffic light before the checkpoint), it becomes easier to dodge the Scorch Wheel.

Stage description: Champ of the Roads

Translation: He is a robot made by remodeling Wily's old car, and is very fuel-inefficient because he uses gasoline for both power and attacks. His special weapon is Burning Wheel.

Note: Burning Wheel is misspelled as "Burning Oil" in the database.

Displays the amount of damage in units that Turbo Man will receive from each Special Weapon in Mega Man 7.

*Rather than taking damage, Turbo Man charges his power with the Thunder Bolt.

Turbo Man appears during the Worlds Collide crossover arc as part of a large army of evil Robot Masters. He joins forces with several other high speed Robot Masters to attack Sonic the Hedgehog, but is tripped by Quick Man after Sonic knocks him down.

Turbo Man is one of the racers in the story "Burning Wheel", which is named after his weapon. He entered in the Battle & Chase competition alongside Dr. Wily and his robots, but under the disguise of a robot created by "Ray Blewilt", an anagram of Albert Wily. During the race, he tries to burn Mega Man, but he dodges and it hits "Proto Man" instead, revealing that he was actually Dark Man 4. After a brief conversation, Mega Man realizes that Turbo Man is one of Wily's robots and they fight.

Turbo Man appeared in the fifth issue of the Brazilian comic as the host of a race.

Turbo Man is the last of Wily's eight robots defeated by Mega Man in the Rockman 7 manga. He also appeared in one panel from the last issue of the Mega Man comic by Dreamwave Productions. 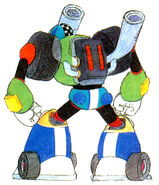 Back side view of Turbo Man

Turbo Man in Sonic the Hedgehog #250

Cameo in the Dreamwave Productions comic 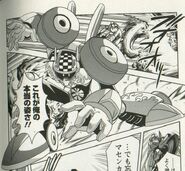 Turbo Man in the manga Rockman 7