Turn Cannon (ターンキャノン, Tānkyanon) is a stationary, rotating cannon in the Mega Man X series that can alternate its firing angles between horizontal and 45-degrees. They are mostly stationed on ceilings and floors, but in some stages they occupy floating platforms.

In Mega Man X8, they can be found in Gravity Antonion's Primrose, Bamboo Pandamonium's Booster Forest and Sigma Palace. The red Turn Cannons that appear in Sigma Palace are equipped with flamethrowers instead of normal cannons. When powered-up by a MAME-Q, green Turn Cannons gain the ability to fire three shots instead of one.

Lift Cannon (リフトキャノン, Rifuto Kyanon) is a Turn Cannon attached to the top of an elevating platform, that appears in Storm Eagle's stage in Mega Man X and Mega Man Maverick Hunter X. The platform moves up and down as the cannon turns, similar to a screw. Once the cannon is destroyed, the platform will fall down. If X stands on the platform, it will rise and allow him to reach the area with a Sub Tank. 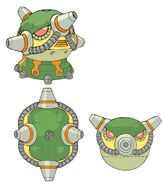 Turn Cannon in Rockman X DiVE.
Add a photo to this gallery

Retrieved from "https://megaman.fandom.com/wiki/Turn_Cannon?oldid=315616"
Community content is available under CC-BY-SA unless otherwise noted.